In planning for a potential World Tour of the Brooklyn Dodgers and the Cleveland Indians, Walter O’Malley writes to his former Dodger partner Andrew Schmitz, a prominent insurance executive. “We are contemplating a six weeks World Tour leaving October 15, returning December 1st. The itinerary would include stops at Honolulu, Guam, Australia, Manila, Japan, Singapore and Ceylon. An alternate route after the Singapore game would take us to South Africa and South America. At this nebulous state I am now interested in learning what the insurance premiums would be to cover our players for say, two million dollars.” The proposed World Tour never came to fruition.

Hank Hollingworth, Executive Sports Editor of the Long Beach Independent Press-Telegram, sent a letter to Walter O’Malley on February 10 on behalf of the editorial writer who was planning a major feature on “great men and how they got that way.” Walter O’Malley, who was to be included, answers the following questions: Q. What’s the most important factor in your success? A. Enjoyment and interest. It helps when your work is also your relaxation. Q. Can you point to any person or incident that was a turning point in your career? A. No. A series of minute incidents kept adjusting the course until a career was in orbit. Q. Can you state a widely held idea about attainment of success which you would dispel as a myth? A. It helps to be there when something significant is developing.

Several local businessmen from Vero Beach, Florida spend $1200 for a huge billboard stating, “Vero Beach -- Year ‘round Vacation Land, Winter Home of Los Angeles Dodgers and affiliated teams.” Peter O’Malley, camp director at Dodgertown, sends a memo to his dad stating, “Enclosed is another picture of the privately-financed sign on U.S. Highway #1, which is now being equipped with lights at no additional cost.” 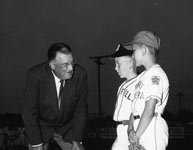 Walter O’Malley responds to Baseball Commissioner William D. Eckert’s February 10 letter about Baseball assisting Little League Baseball in its Foundation fund drive. “I am prejudiced in favor of Little League and always have been,” writes O’Malley. “I believe it is a powerful grass root movement that has contributed a great deal not only to the youth of our country but to professional baseball. I am definitely in favor of BASEBALL making a maximum contribution, financial and moral to the future of Little League.”