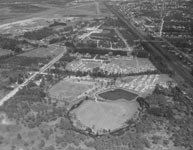 Wally Skiscim, renowned photographer from Vero Beach, Florida, receives the following note from Walter O’Malley regarding aerial photos of the Dodgertown complex, “Your photos of Holman Stadium and Valentine Lake are well done and show no sign of nervousness on your part as you must have been hanging from the plane by your heels.” Less than one month later, Holman Stadium was dedicated.

Walter O’Malley appears before a panel on “Press Conference,” a half-hour show on KABC-TV Channel 7 in Los Angeles. The show was taped two days earlier and according to Sid Ziff in his Los Angeles Times’ column of February 19, “People who listened to Press Conference discovered anew that O’Malley is a most interesting conversationalist, and he projects a warm personality.” Under discussion were O’Malley’s plans for Dodger Stadium, including two new escalators; Walter Alston’s status as manager; and Coach Leo Durocher.

The National Negro Foundation of the Performing Arts in Los Angeles honors Walter O’Malley with its Humanitarian Award “for his consistent efforts in furthering the cause of human rights and the dignity of man, regardless of race, color or creed.”