Florida Governor Farris Bryant sends a telegram to Walter O’Malley at Dodgertown in Vero Beach stating, “On behalf of the people of the State of Florida, we again welcome the Los Angeles Dodgers to Florida for their spring training. I am especially pleased that you have extended the scope of this training to including the famous Tokyo Giants from Japan. Florida’s fame as a spring training ground has now truly become international. My best wishes for a successful season.”

Walter O’Malley relaxes by playing a round of golf at the Bel Air Country Club with orchestra leader Lawrence Welk and friends.

Los Angeles City Councilman Gilbert W. Lindsay of the 9th District congratulates Walter O’Malley on his “recent election to the Los Angeles Chamber of Commerce as a member of the Board of Directors for 1970. Knowing of your interest in the development of our great city, I’m certain you will do an outstanding job.” 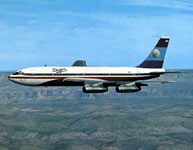 The Dodgers christen their new team airplane, the 720-B Fan Jet named “Kay O’ II” to honor Walter O’Malley’s wife Kay, on a four hour trip from Los Angeles International Airport to Vero Beach, Florida. On the morning of its inaugural Dodger flight, Kay O’Malley officially christens the plane at Los Angeles International with a bottle of champagne. Walter O’Malley purchased the 720-B Fan Jet to replace the Electra II (known as the Kay O’) from American Airlines. The cruising speed of the Electra was 350 miles per hour, while the 720-B is 610 mph. O’Malley became the proud owner of the largest corporate-owned jet in the world. According to Capt. Lew Carlisle, who piloted the new jet, the Electra had racked up 4,500 hours in the air and covered approximately 1,575,000 miles. Capt. Carlisle, who joined the Dodgers in 1965, and his flight crew were trained for the 720-B at the American Airlines Flight Academy in Ft. Worth, Texas. The Los Angeles Dodgers previously flew a team-owned Convair 440 and a DC-6B. The 720-B is powered by four Pratt-Whitney engines, each having 17,000 pounds of takeoff thrust. The plane’s maximum altitude is 42,000 feet. The Dodgers configured the plane to seat 70 persons comfortably, rather than its normal capacity of 105.