Responding to Bill Corum’s column in the New York Journal American which pointed out that no plaque honoring legendary Dodger Manager Wilbert “Uncle Robbie” Robinson was on display at Ebbets Field, Walter O’Malley sends a letter stating, “I got quite a kick out of your column about the Dodgers and particularly from the allusion to Uncle Robbie. I thought I surely had you on this one. But investigation proved that you were correct and there is, indeed, no plaque at Ebbets Field honoring that great old figure in Brooklyn baseball history. May I say that it will be attended to this Spring and thank you to you for calling our attention to it.” A plaque was subsequently placed on display honoring Robinson.

Kay and Walter O’Malley attend the 112th Emerald Ball fund-raising gala at New York’s Waldorf-Astoria. With generous support, the Ball raised the largest amount in its history, a net of $55,000 to benefit Brooklyn orphans.

The Dodgers conduct a three-day baseball school for athletic-officers, coaches and trainers at Maxwell Air Force Base in Montgomery, Alabama, prompting Col. James G. Pratt, U.S.A.F. Commander to write to Walter O’Malley, “A complete report on this school is being compiled to forward to headquarters, United States Air Force. I thought you would be interested to know that this report will reflect our deep gratitude to you and your organization for the splendid contribution you have made to service baseball in the Southeast.” 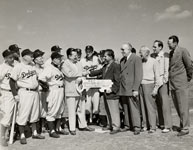 Florida State Senator Merrill P. Barber, acting on behalf of Vero Beach Mayor Elmer Bauer, presents Walter O’Malley with a key to the city of Vero Beach. O’Malley makes a short acceptance speech to the fans at Dodgertown’s Holman Stadium and then introduces Vice President Fresco Thompson, whom he referred to as “Vice President in charge of winning World Championships.” Thompson told the crowd at his turn at the microphone that he hopes to continue in office for another term, believing the Dodgers would repeat in 1956.Bob Curzon, Vero Beach Press-Journal, February 23, 1956

Walter O’Malley discusses the possibility of playing exhibition games on the West Coast in 1958, since he had announced the day before the acquisition of the Los Angeles Angels of the Pacific Coast League and their home park, Wrigley Field. “Now that there is the possibility we will have an interest on the west coast next season, there is a good chance we will fly out there for some exhibitions in the spring,” he said. “I have an idea in mind that, of course, will have to be worked out.”Los Angeles Herald-Express, February 23, 1957

Baseball Commissioner Ford C. Frick arrives in Los Angeles to get better acquainted with the issues the Dodgers face at the L.A. Memorial Coliseum and for their new stadium. “Naturally, I am asked many questions about the Dodgers and their future plans for Los Angeles,” said Frick. “I understand that the way is almost cleared for Walter O’Malley to begin construction...and it was a most welcome sight to see the sketch of the proposed park in the paper this morning. Los Angeles and San Francisco helped the majors increase their 1958 attendance by about 1 million people over 1957. I have always been for expansion, as you know, and favored it to the West Coast all along.”Braven Dyer, Los Angeles Times, February 23, 1959

Shigeru Mizuhara, the longtime Hall of Fame Manager of the Tokyo Yomiuri Giants, sends a letter to Walter O’Malley explaining his change of position and that he will not be attending the Giants’ training at Dodgertown in Vero Beach, Florida. “A turn of events has altered my status so that this year I will not accompany the team I worked with for over twenty seven years. Though I deeply regretted having to leave the close associations formed over almost three decades with the Giants, I am now General Manager and Field Manager of the Toei Flyers. Baseball bonds are among the strongest in the world. They do not break easily...The Giants will be a part of my soul as long as there is life in my body. But, in the larger sense, the spirit of baseball, itself, lives on in teams everywhere. I have resolved to devote my every effort toward the development and growth of Japanese Baseball.”

Harold S. Faust of the First Presbyterian Church in Vero Beach, Florida writes to Walter O’Malley about the planning process for a Billy Graham Rally to be held at Dodgertown’s Holman Stadium on March 31, 1961. “Thank you again for allowing us to use your facilities for the Billy Graham Meeting,” said Faust. “I shall never forget the fine talk you gave at the Memorial Service in our Church. It was magnificent.” 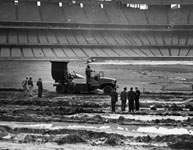 After two weeks of heavy Los Angeles area rains, Walter O’Malley rents an Allison jet airplane engine from an F-84 fighter plane mounted on a truck to blast hot air to dry a soggy, muddy Dodger Stadium infield and outfield. The engine spewed a jet blast of 300 feet of heat, estimate at 250,000 BTUs (British thermal units). As time was definitely running out to sod the new field for the April 10 opening, O’Malley also employed two helicopters to help dry the field with their powerful downdrafts of air.

When the Dodgers reported for Spring Training at Dodgertown in 1962, they had a distinguished visitor, as Nicholas A. Volpe, one of the world’s premier portrait painters, arrived with them. Volpe was commissioned to do a series of color paintings of the 1962 players for Union Oil, a major Dodger radio-TV sponsor, who would then make copies to distribute at Southern California service stations and on selected special event nights at Dodger Stadium. A Syracuse University graduate, Volpe headed the art department at Jacksonville College in Florida before moving to Hollywood. He received a lifetime contract to do portraits each year of the actors and actresses who won the Academy Award’s Oscar for best performances. He wrote and illustrated a book on America. Volpe’s paintings of the famous California Missions were highly sought by art collectors.

L.I. “Brock” Brockenbury, the West Coast Sports Representative for the Associated Negro Press, sends a letter of thanks to Walter O’Malley for meeting with him, umpire Emmett Ashford of the Pacific Coast League and Brad Pye, Sports Editor of the Los Angeles Sentinel. “You said some encouraging words to Emmett and we are going to get busy right away. I think that we all agree that Emmett should have been in the majors a long time ago had it not been for his race.” Three years later, Ashford became the first African-American to make the major leagues as an umpire in the American League, after spending 14 seasons in the minors. 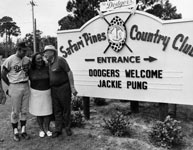 Walter O’Malley welcomes Jackie Pung to Dodgertown in Vero Beach, Florida. Pung was the first Hawaiian in the LPGA and won the U.S. Amateur in 1952. Pung was one of the original members of the 1960 LPGA National Golf School staff in Ann Arbor, Michigan, which taught the sport to teachers.

CBS Television airs a two-hour dramatization of Roy Campanella, Hall of Fame catcher of the Dodgers and his life’s struggle following his crippling automobile accident on January 28, 1958. In the movie based on Campanella’s book, “It’s Good To Be Alive,” Paul Winfield stars as Campanella, the three-time National League MVP, while actor Ramon Bieri portrays Dodger President Walter O’Malley.