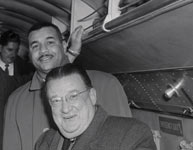 Placing the Dodgers under orders to “get back into characters,” Walter O’Malley vowed that the team known for its “daffiness and weird escapades” would have to quit playing it so straight and maintain a sense of humor. “This is Brooklyn,” he says. “For years that’s what our fans have come to see and expect. So let it be known now, we want characters.” When O’Malley found out that catcher Roy Campanella was ordered to shave off his moustache, he said, “let Campanella keep his moustache. We simply must have our characters.”Oscar Fraley, UP, Newsday, February 25, 1953