At a press conference at Dodgertown in Vero Beach, Florida, Walter O’Malley is asked whether there would be more games played in Vero after the contract runs out in Miami in 1953. He responds, “It all depends on whether or not we will be able to draw big enough crowds in Vero Beach to make it pay. This city is growing rapidly. I can see many changes that have occurred during the past three years. The new causeway to the beach has started a building boom on the island and we can picture Vero Beach as a nice size city in the future.” O’Malley also announces that distinguished designers Norman Bel Geddes and Capt. Emil Praeger were set to visit Vero on March 3 to look over the site and discuss the possibilities of erecting a 5,000-seat stadium. The Vero Beach Press Journal concluded “The more fans who turn out to the games, the more games they will have to turn out to.”Bob Curzon, Vero Beach Press Journal, February 28, 1952

Baseball Commissioner Ford C. Frick travels to Los Angeles and take a first-hand look at the hilly site for new Dodger Stadium. “This place has great potential,” the Commissioner said. “Of course, you have to use your imagination a little to see the ballpark. There’s a lot of dirt to be moved. I’ve always been in favor of having major league ball on the (West) coast. As a New Yorker, I hated to see the Dodgers and Giants leave, but as a baseball man I think the move was wise. I would not be surprised at all to see other teams in the West and the Southwest and other places where they do not have big league baseball now.”Los Angeles Examiner, February 24, 1959 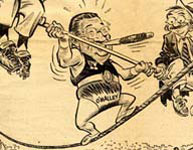 A caricature of Walter O’Malley is depicted on the cover of The Sporting News by famed Los Angeles cartoonist Karl Hubenthal. O’Malley is portrayed as a tightrope walker with the burden of a Los Angeles Dodger player on one end of a balance staff and a citizen of Los Angeles on the other end. The rope, attached to the Dodgers’ temporary baseball home, the Los Angeles Memorial Coliseum on one end, holds O’Malley, even as he carefully works his way across it to the end that will result in his dream stadium being privately financed, built and maintained. 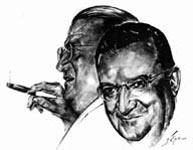 Famous portrait artist Nicholas Volpe agrees to produce a series of prints of various Dodger players for the 1969 season for Union Oil. The prints were given to fans at Dodger Stadium on designated Friday nights throughout the season. In 1962, Volpe did a set of well-received portraits for the Dodgers. He would produce one more successful set, distributed by Union Oil, in the 1982 season.

John Wiebusch of the Los Angeles Times watches Walter O’Malley, overseeing the Dodger players participating in calisthenics at Dodgertown in Vero Beach, Florida, and asks him if he ever joins in. “I only make the rules,” said O’Malley. “I don’t have to do them.” In a jovial mood, O’Malley also relates to his press room poker playing table about doing his own laundry and the subsequent problem. “I got some red socks in with my underwear and everything came out pink,” said O’Malley. “Now, I’ve been called a lot of things, but nobody ever called me dainty...not until now anyway.” Everyone at his table is laughing, but O’Malley isn’t upset because of the time of the year. “My friends” he tells his poker mates, “pink shorts and all, it’s a pleasure to be back in Vero.”John Wiebusch, Los Angeles Times, February 24, 1969