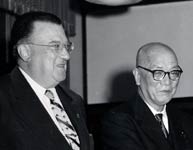 Matsutaro Shoriki, owner of the Yomiuri Giants, writes to Walter O’Malley at Dodgertown in Vero Beach, Florida, regarding the Spring Training visit of his team. “I am taking the liberty of writing you to thank you, first of all, for taking members of the Yomiuri Giants Baseball team under your wings during spring training,” said Shoriki. “I know, as well as the members themselves, that there are many things Japanese baseball players can learn from your team, one of the outstanding baseball teams of America, the home of baseball. I am looking forward to the team’s return to Japan for I am sure they will be able to contribute much toward improving baseball in Japan after training with the Dodgers.” The Giants went on to win the Japan Series that season.

Walter O’Malley speaks to Dick Robinson, staff writer of the Pasadena Star-News, about the future of the Dodger organization and his greatest satisfaction. “We have a great number of young players. They’re coming. It may be this year or the next, but soon I think you’ll see the most exciting Dodger team in years. And this is something I have been exceptionally proud of. During the past 20 years, the Dodgers have almost always been a contender. This is despite the fact we have had to change our style of obtaining players when the draft began. In the past, we had been the most aggressive team in terms of scouting. We poured a lot of money into untried youngsters. With the draft, things changed completely. Yet we still are contenders. That is probably the most satisfying thing to me. This organization is made up of people who want to do better and they’ve been able to accomplish their goals — year in and year out.”Dick Robinson, Pasadena Star-News, February 25, 1970