The New York City Council votes 17-5 for the approval of Mayor Robert Wagner’s Brooklyn Sports Center proposal. The Brooklyn Sports Center was to be at or near the Long Island Rail Road terminal at the intersection of Atlantic and Flatbush Avenues. Meanwhile at the Waldorf-Astoria, at the annual meeting of the New York Convention and Visitors Bureau, Walter O’Malley spoke on behalf of the Brooklyn Sports Center. He held a domed model of the proposed all-weather sports stadium along with Thomas Goodfellow, President of the Long Island Rail Road; Robert Moses, Parks Commissioner for the City of New York; Bernard F. Gimbel, President of the Bureau; and John P. McGrath, counsel to the Brooklyn Borough President. 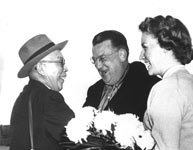 Two players from Japan’s Yomiuri Giants arrive at Dodgertown in Vero Beach, Florida, as batterymates Sho Horiuchi, a right-handed pitcher and Shigeru Fujio, a catcher, will train alongside the Dodgers during the spring. The Giants’ Manager Shigeru Mizuhara, along with the players, were invited with all expenses paid by Walter O’Malley to attend Spring Training and help further develop the friendly relations from the 1956 goodwill trip the Dodgers made to Japan. The trio was joined by renowned Japanese sportswriter Sotaro Suzuki, who was most instrumental in the arrangements for six major league tours to Japan, dating back to the Babe Ruth All-Stars in 1931 and continuing to the Dodgers’ 1956 tour. Suzuki was elected to Japan’s Baseball Hall of Fame in 1968. On March 22, 1957, the three guests from Japan toured Ebbets Field in Brooklyn and were intrigued by the lush green grass, because the fields at home were all dirt.

Former Dodger great Roy Campanella arrives at Dodgertown in Vero Beach, Florida to handle special coaching responsibilities, arranged by Walter O’Malley. Eleven months following his automobile accident, which left him paralyzed from the chest down and partially paralyzed in both hands, Campanella had rehabilitated sufficiently to get back to baseball, the sport and job he loved. “He has a specially modified (wheel) chair for outdoor use in which he will do his coaching.” writes Howard A. Rusk, M.D. in the New York Times. “There has never been a more beloved figure in baseball than Roy Campanella. As in baseball, his courage and character have also left an indelible mark on rehabilitation.” O’Malley, Dodger Manager Walter Alston, Los Angeles City Councilwoman Roz Wyman, Dodger Director Bud Holman, players Gil Hodges, Carl Erskine and Jim Gilliam were all at the Vero Beach Airport to welcome “Campy” home.Howard A. Rusk, M.D., New York Times, March 1, 1959

Dodger star pitchers Sandy Koufax and Don Drysdale begin an unprecedented joint holdout, as they seek from Walter O’Malley a three-year, $1 million contract (at a time when the average major league salary was about $30,000 and the minimum salary was $6,000). The hurlers, negotiating in tandem, hire prominent entertainment attorney J. William Hayes to represent them. The issue was resolved satisfactorily for all parties at the end of March. 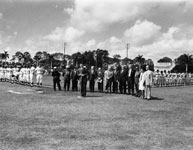 On Walter O’Malley’s invitation, the Yomiuri Giants visit Dodgertown for the third time. Preparations are made by the City of Vero Beach (Florida) for their arrival. The Giants have six individuals who were eventually elected to the Japanese Baseball Hall of Fame: Masaichi Kaneda, pitcher; Sadaharu Oh, first baseman; Shigeo Nagashima, third baseman; Manager Tetsuhara Kawakami; Coach Motoji Fujita (a former pitcher); and Coach Shigeru Makino.