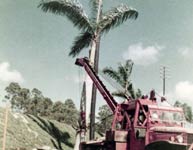 Dodger stockholder Mrs. May L. Smith purchases and presents to the team 50 Royal Palm trees, each some 25 feet high, in remembrance of her late husband John L. Smith. The impressive trees were being transported and planted around the new Holman Stadium. Mr. Smith was President of Charles A. Pfizer & Company and 25 percent Dodger stockholder upon his death on July 10, 1950. 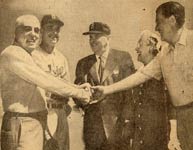 Walter O’Malley, Bud Holman and Dodger Manager Walter Alston warmly welcome U.S. Secretary of Defense Charles Wilson and his wife to Dodgertown in Vero Beach, Florida, one day before the official start of spring training. O’Malley facetiously tells the members of the press that day, “I’d like to say that our problem, which has been defense, has been solved. Charles E. Wilson, Secretary of Defense, will arrive by plane at 12:30 and I want to take Alston down to meet him.”Roscoe McGowen, The Sporting News, March 9, 1955

Dodger Manager Walter Alston graces the March cover of Sport magazine and is named its “Man of the Year” for guiding Brooklyn to its first-ever World Championship in 1955. The article in part reads, “When Walter Alston was given Chuck Dressen’s job as manager of the star-studded Brooklyn Dodgers, the reaction — among baseball people and newspapermen as well as the general public — was, ‘Who he?’ Hardly anybody had ever heard of him...Nor did it help, in the eyes of those who saw fit to second-guess and criticize owner Walter O’Malley’s choice, that Alston’s major-league record consisted, in total, of one time at bat for the St. Louis Cardinals...In 1955, Walter Alston, in his second year as field boss of the Dodgers, got his club away to the fastest start in baseball history, won the National League pennant hands down, then beat the hated Yankees in a breathtaking seven-game World Series.” 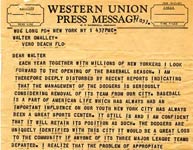 Robert F. Wagner, Mayor of New York, writes a telegram to Walter O’Malley in Vero Beach, Florida expressing concern about the possible relocation of the Dodgers. “I realize that the problem of appropriate facilities poses serious problems for the Dodger management. As you know, I have been deeply concerned with the problem. I am hopeful that the city administration will be able to aid in its solution. Concrete and constructive suggestions are under consideration. All possible efforts to arrive at a satisfactory solution in the best interest of the community will be made.”

Former Dodger shortstop and catcher Bobby Bragan, Director of Player Personnel for the Houston Astros, was asked if the club’s new all-weather Astrodome would be high enough at 220 feet. In his response in The Sporting News, Bragan said, “When the Dodgers were thinking of building an all-weather stadium (in Brooklyn), Walter O’Malley had Ed Roebuck, one of the best fungo hitters in the game, try to hit a ball as high as possible. A helicopter was gauging the distance with each smack. The tops was 182 feet...so 220 was agreed upon...I don’t think any slugger can hit one that far in the air — not even Dick Stuart.”Ray Gillespie, Diamond Facts and Facets, The Sporting News, March 1, 1961

At the Major League Executive Council Meeting at Galt Ocean Mile Hotel in Ft. Lauderdale, Florida, Walter O’Malley, as a National League Representative, votes for the resolution to present a Cy Young Award in both the American and National Leagues, instead of past practice of having only one Cy Young winner for both leagues. After discussion, it was unanimously agreed by the Executive Council that commencing with the 1967 season, one player in each league would be honored with the Cy Young Award.

Walter O’Malley showed an interest in agriculture for Dodgertown in Vero Beach, Florida. O’Malley was quoted as saying, “Whereas it takes an orange four years to bear fruit, the Hawaiian papaya will do so in 14 months. I have paid as much as fifty cents for a papaya at the Farmers Market in Los Angeles. If I could grow them in Florida, we really would have something.” Unfortunately, it was reported that after 1000 papaya seedlings were planted, only 20 were left after a severe winter freeze.Los Angeles Times, March 1, 1969

Syndicated columnist Melvin Durslag of the Los Angeles Herald-Examiner writes of a rare failure by Walter O’Malley. “Three years ago, he (O’Malley) was convinced that Hawaiian papaya would grow in Vero Beach. Planting a thousand seedlings as a starter, and drywashing his lands, envisioning a kill in this rare fruit, he awaited the results. All but eight of the seedlings died. ‘Apparently,’ he concluded, ‘they need the volcanic soil of Hawaii.’ But don’t write off O’Malley prematurely. If there is a future in it, he may move a volcano to Vero Beach.”Melvin Durslag, “O’Malley’s Golden Touch”, The Evening Star, Washington, D.C., March 1, 1972