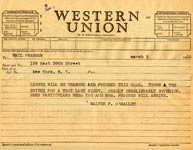 Walter O’Malley sends a telegram to Capt. Emil Praeger, designer for Holman Stadium at Dodgertown in Vero Beach, Florida, on the results of a test for the stadium lights. O’Malley says, “Lights will be changed and focused this week. Threw the switch for a test last night. Result unbelievably superior.” On this day, O’Malley also sends a letter to Merrill Barber, former Mayor of Vero Beach, and chairman of the dedication committee for Holman Stadium, stating, “We have the stadium pretty well under control and the Royal Palms (trees) we have planted add a great deal to its appearance. We made a test on the lights last evening and I truly believe it is a better lighting plant than we have in Brooklyn. Thank you for everything.” 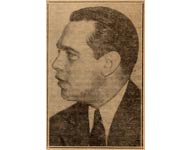 Former New York Giant player and Manager Bill Terry is invited by Walter O’Malley to provide hitting instruction to Dodger players George Shuba and Bill Antonello during Spring Training. Terry was the last National League player to hit .400. Before the 1934 season, Terry had been asked by a sportswriter how the Brooklyn Dodgers would play. Terry, in jest, said, “Is Brooklyn still in the league?” after many seasons of sub par play by the Dodgers. His quip came back to haunt him when the Dodgers defeated the Giants twice in a late series to hand the National League Pennant to the St. Louis Cardinals.

Walter O’Malley reorganizes his front office executives and names E.J. “Buzzie” Bavasi as General Manager, the first time that title has been used since O’Malley became President in 1950. Also, Dick Walsh is named Assistant General Manager. Vice President Fresco Thompson continues in charge of all minor league operations, while Al Campanis is named as his assistant, as well as Director of Scouting. Arthur E. “Red” Patterson, who had served as the Assistant General Manager, even though no one had the G.M. title, is now Publicity Director. Bavasi joined the Dodgers in 1940 as an assistant to the road secretary. When O’Malley became Dodger President in 1950, he immediately named Bavasi and Thompson as his two Vice Presidents.

Walter O’Malley entertains his top Dodger Spring Training executives and invited guests for a one-day sightseeing tour of Nassau, Bahamas. The party of 27 flew to Windsor Field on the Dodger Convair-440 plane from Dodgertown in Vero Beach, Florida. After a morning of shopping on Bay Street, lunch at the British Colonial and a three-hour catamaran trip in New Providence waters, they dined at Cumberland House before flying back to Dodgertown that evening.

The fourth grandchild of Walter and Kay O’Malley is born at Pasadena’s St. Luke’s Hospital when daughter Terry gives birth to Mary Kay. Named for her two grandmothers, Mary Kay balanced the grandchildren at two boys and two girls. When his son-in-law Roland Seidler called at 2:45 a.m. (Florida time on March 4) to give him the great news, O’Malley said, “Just what I wanted — another girl. We’ll all celebrate today on British soil.” The Dodger plane “Kay-O’” was being fueled for an early morning flight to Nassau, Bahamas, where O’Malley and his invited 54 guests and executives were heading for an annual outing.Charles G. Johnson, The Tidings, March 8, 1963 The festivities started en route with a surprise champagne party on the Dodger Electra Jet.The Sporting News, March 16, 1963

Walter O’Malley writes a note to close friend and movie producer Mervyn LeRoy, who was to be honored at the 48th Annual Academy Awards at the Dorothy Chandler Pavilion in Los Angeles on March 29, 1976. “Congratulations on the Irving Thalberg Memorial Award and also on your youthful picture in yesterday’s paper. All the best and say ‘Hi’ to (LeRoy’s wife) Kitty.” The Irving G. Thalberg Memorial Award is presented to “creative producers whose bodies of work reflect a consistently high quality of motion picture production.” LeRoy was the 23rd recipient of the award, which is not necessarily given annually. During persistent heavy rains in Los Angeles, in the final phases of construction of Dodger Stadium for its April 1962 opening, it was LeRoy who suggested to O’Malley that the Dodgers could overcome a less than attractive playing field by doing what they do in Hollywood — dye the grass green! The friendly solution worked for Dodger Stadium’s grand opening.