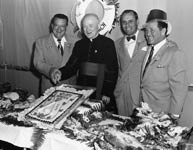 Walter O’Malley hosts his first Dodger St. Patrick’s Day party at the Sea Gull Hotel in Miami, Florida. O’Malley invites officials of the New York Giants, including Vice President Chub Feeney and Pete Stoneham, son of owner Horace Stoneham, to his gala on the beach. Giants’ secretary Eddie Brannick always had thrown a party on St. Patrick’s Day in the past, but was pre-empted this year by O’Malley, who arranged to have officials of both the Dodgers and Giants celebrate together at the brand new hotel. The press corps from New York, Brooklyn and Miami, as well as umpire Jocko Conlan were among the invited guests. Monsignor William Barry of St. Patrick’s Church in Miami Beach cut a decorated cake stating, “Welcome Irishmen.” Mrs. May Smith, the widow of John L. Smith and a stockholder of the Dodgers, attended the festivities. Dodger Manager Chuck Dressen was in the hospital with hives and was unable to participate, but his coaches Clyde Sukeforth, Jake Pitler and Cookie Lavagetto represented the team.The Sporting News, March 28, 1951

Walter O’Malley moves his festive St. Patrick’s Day party to Vero Beach tourist destination McKee Jungle Gardens, complete with decorations, music and skits in a well-decorated “Hall of Giants” around an enormous 35-foot one-piece mahogany table. According to Roscoe McGowen writing in The Sporting News about the party and its 130 guests, “Everything was green — there wasn’t a chance of getting an orange juice — including the draft beer and the ice cubes. The O’Malley had special labels on the bottles of Irish cheer, which was called ‘Old O’Malley,’ a whiskey which will be 12 years old in 1964. Among those present was Edmund Boots, executive vice president of U.S. Steel, who was listed as Eddie Boots in a quartet called ‘The Mayo Minstrels.’ Mrs. John Smith, stockholder in the Dodgers, was present, and two National League umpires, Larry Goetz and Jocko Conlan, joined in the fun. Conlan, one of the highest Irish tenors around set one of the high spots of the evening when he sang a love song to Kay O’Malley, while Greg Mulleavy, a normally quiet and soft spoken fellow who is a scout, wielded a shillelagh and directed proceedings with a constant-stream of brogue-tinged orders.”Roscoe McGowen, The Sporting News, March 26, 1952 The annual St. Patrick’s Day tradition, hosted by O’Malley, continued each Spring Training, growing to legendary status and became a real treat for executives, personnel and invited guests. 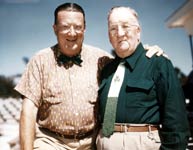 Walter O’Malley indicates that there would be “some excess money” from radio and television All-Star Game and World Series receipts to be dispersed to old-time ballplayers. The money would be presented to the National Association of Professional Baseball Players for distribution. The association is comprised of many old-time players who never played in the major leagues and are therefore not eligible for any benefits from the major league players’ pension plan. O’Malley also suggested a “home” for players in need and even mentioned the “hospital building” at the former Naval Air Base at Vero Beach, Florida as a possible site. “It is evident that these receipts will be more than ample to take care of the pension plan, which is on a ten-year basis,” said O’Malley. “I certainly don’t believe the players will have any objection to utilizing these surplus funds for the purpose I have mentioned.”

According to Roscoe McGowen in The Sporting News, “Walter O’Malley tossed his annual St. Patrick’s Day party at Vero Beach, featuring a Japanese motif in all decorations. Walter sent the new Dodger Convair (440-model airplane) to Miami that Sunday evening to fly the scribes and their wives back to Vero, then flew ’em all back to Miami after the party. Bump Holman, Bud’s youngest son, is the chief pilot. His co-pilot was Bob Chew, one of the ranking Eastern Airlines pilots. O’Malley came down on the plane, wearing a bright green beret and a green shamrock tie. Sotaro Suzuki, the veteran newspaperman and director of the Tokyo Giants, also came along, sporting a green cap, ‘Look,’ he said, grinning gleefully, ‘I’m Irish now.’”Roscoe McGowen, The Sporting News, March 27, 1957

As his son Peter is named Dodger President, Walter O’Malley moves to the new Dodger position of Chairman of the Board. At 32, Peter becomes the youngest top executive in baseball.