NBC-TV televises live coast-to-coast from Dodgertown in Vero Beach, Florida all of the Spring Training activities of the camp. 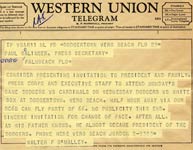 Walter O’Malley writes to Pierre Salinger, Press Secretary for President John F. Kennedy to invite the President and his family and the press corps to attend a game at Dodgertown either on March 27 against St. Louis or on March 29 against the Chicago White Sox. O’Malley writes Salinger, “Half hour away via our DC 6B (plane) can fly party of 66. No publicity this end. Sincere invitation for change of pace. After all, as his father knows, he almost became President of the Dodgers.” The last line refers to Joseph Kennedy’s interest in purchasing a controlling interest of Dodger stock in 1950 in order to place his son John in charge.

Listed on the United Negro College Fund, Inc. letterhead as one of the “Sponsors,” Walter F. O’Malley receives a memo from James M. Reynolds, Chairman of the organization informing campaign officers and sponsors of the final 1962 California campaign totals. Southern California accounted for $20,000. This represents an increase of 75 percent over what has ever been raised in the Southern California area before,” writes Reynolds. “May I express to you my personal thanks and the appreciation of my fellow campaign officers for all that you have done to help broaden scholarships and educational opportunities for 25,000 young Americans in the South.”

Walter O’Malley congratulates Thomas W. Moore, President of ABC-TV on a new five-year contract. O’Malley at the time was in the midst of the 1966 contract negotiation with star pitchers Sandy Koufax and Don Drysdale and wrote Moore, “Sorry you did not keep it quiet as it might give Koufax and Drysdale some ideas.”

Bob Feller, elected to the National Baseball Hall of Fame in 1962 in his first year of eligibility, writes a letter to Dodger Chairman of the Board Walter O’Malley regarding O’Malley’s proposal for realignment in baseball. The winningest hurler in Cleveland Indians history writes, “It is too bad that many baseball officials have not heeded your advice from time to time, and especially your latest proposal of realignment of the leagues so that each will have three four-club divisions. It is certainly a realistic proposal and should have been adopted years ago.” The three-division format was finally adopted by MLB for the 1994 season, 15 years after O’Malley’s passing.