Walter O’Malley confirms an agreement for the Dodgers to contribute Holman Stadium and two Dodger minor league teams for a charity game to be played for the Indian River Memorial Hospital. “We are doing this because of our genuine interest in your hospital and we do hope you raise a substantial sum of money to help finance the new wing.”

Besides televising all 77 home games and one exhibition contest, Walter O’Malley announces that the Brooklyn Dodgers will expand their total telecasts to 103, by adding 25 road contests during the 1955 season. “We have arrived at a point at which we must adopt a positive attitude toward television and resist the negative attitude,” O’Malley says. “There is very little money in this move for the club, although it will be an expensive operation for the sponsors. For instance, the cable cost for televising a game from St. Louis (the team farthest West) will run about $4,800. Our only thought is to make a move on solving this attendance problem (at aging Ebbets Field). We can sell all our box seats, all our reserved seats, but those general admissions don’t go.”

After holding out in tandem during contract negotiations nearly the entire spring, star pitchers Sandy Koufax and Don Drysdale finally agree to terms with the Dodgers. Koufax is to be compensated $125,000, while Drysdale will earn $110,000 for the 1966 season. The Dodgers had already broken camp at Dodgertown in Vero Beach, Florida and moved to Arizona for some final exhibition games, even as the agreement was struck. At one stage, Koufax and Drysdale had asked for the Dodgers to pay them a combined total of $1 million for three-year contracts. The unprecedented double holdout began on February 28. The average salary was nearly $30,000 and the major league minimum salary at the time was $6,000. 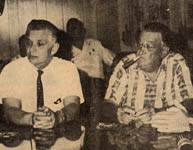 Dodger Chairman of the Board Walter O’Malley holds a meeting in the Dodgertown Cafeteria for Vero Beach officials, youngsters and parents to discuss ideas for a recreational center to give area youth a place for constructive activities. O’Malley said that if a local movement to fund a facility were started, he would contribute the first $1,000. O’Malley related that he had been coming to Vero Beach for 23 years and every year he “reads of problems with young people.” He said the Dodgers have had hundreds of ballplayers at Dodgertown every spring, many of them teenagers, but “not once in 23 years has there been a police blotter entry involving any of the Dodger teenagers.” That success, he said, was in part due to the self-contained, on-site recreational facilities for the players. “There are plenty of chances for our own teenagers to blow off steam in a wholesome way.”Duke Newcome, Florida Today, March 31, 1970