In his column “From the Ruhl Book,” Oscar Ruhl writes that Walter O’Malley held discussions with Abe Saperstein of the Harlem Globetrotters and Hank Greenberg, Hall of Fame player and Vice President of the Cleveland Indians, regarding a world baseball tour following the season. The tour would have started in Brooklyn and made stops in Australia, South America and North Africa before finishing in Dublin, Ireland. O’Malley considered the proposal but rejected the idea saying, “World conditions are against such a junket in the foreseeable future. Besides, the Dodger players have other commitments.”Ocscar Ruhl, “From the Ruhl Book.” The Sporting News, April 2, 1952

A chance meeting between Walter O’Malley and heavyweight boxing champion Rocky Marciano at a banquet led to a tryout for Marciano’s younger brother, Louis Marchegiano, a third baseman. After Marciano told O’Malley about 18-year-old Louis who could play baseball, the Dodger President suggested an all-expenses paid tryout for the young man at Dodgertown in Vero Beach, Florida. The 5-foot-9, 175-pound Marchegiano spent six days at Dodgertown but did not overwhelm the coaches and scouts who said he had a “good arm” but were concerned about his bat. Vice President Fresco Thompson said, “We’d consider signing him to a low classification contract after graduation, but that’s all.” Marchegiano returned to his final year at Thayer Academy in Massachusetts.Zander Hollander, New York World-Telegram and Sun, April 3, 1953 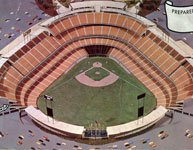 A scale model of Dodger Stadium goes on display at Valley National Bank in Glendale, California for one week. Former Dodger player and Manager Casey Stengel served on the bank’s Board of Directors. During the year prior to the opening of Dodger Stadium, the model was in extreme demand as it made the rounds at businesses throughout the Los Angeles area.