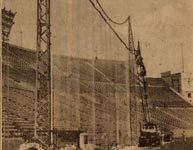 The famed 42-foot high screen in left field at the Los Angeles Memorial Coliseum, the temporary home of the Dodgers until Dodger Stadium is privately built by Walter O’Malley, goes up as workmen round the baseball field into shape for the April 18 home opener against the San Francisco Giants.Los Angeles Times, April 6, 1958

Walter O’Malley announces he has sold the New York Subways Advertising Company, largest in the transit advertising industry, to O’Ryan & Batchelder and Capital Cities Broadcasting. According to Advertising Age, “New York Subways accounts for about 25% of the medium’s national billings, and derives from 75% to 80% of its revenues from national advertisers. It represents 6,800 of the 60,000 transit vehicles in the U.S.”Advertising Age, April 9, 1962 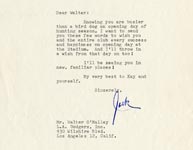 Jack Warner, President of Warner Bros. Pictures, Inc., sends a letter to Walter O’Malley wishing him success for the Grand Opening of Dodger Stadium. “Knowing you are busier than a bird dog on opening day of hunting season, I want to send you these few words to wish you and the entire club every success and happiness on opening day at the Stadium,” writes Warner. “And I’ll throw in a wish from that day on too! I’ll be seeing you in new, familiar places!”

TV Guide discusses with Walter O’Malley his philosophy for success and the use of television for the Dodgers at home and on the road. “The first thing we offer is a comfortable, clean stadium with plenty of parking,” said O’Malley. “Second, our prices are reasonable; tickets are priced the same as in 1958. Third, we promote baseball; we work hard on a very large program of group sales. Fourth, we usually put a good product on the field. And, finally, we don’t give it away through television.” According to the article by columnist Melvin Durslag, “One of the pioneers in baseball TV, O’Malley says he learned long ago that nothing damaged his business more than showing home games on TV.” O’Malley said, “When we operated in Brooklyn, we found that our increase in TV revenue was in direct proportion to our decline in attendance. The only difference was, we were losing all the fringe money (i.e. parking, concessions and souvenirs). In vertical cities, such as New York and Chicago, you might get away with a little more home TV than in horizontal cities, such as Los Angeles. If we televised home games in a spread-out place like Los Angeles, where our patrons drive miles, no one would come except the players’ wives. And a lot of them might stay home, too.”Melvin Durslag, TV Guide, April 5, 1975