Walter O’Malley writes a letter to Gordon McLendon, owner of KLIF Radio in Dallas, Texas, regarding broadcaster Jerry Doggett. “I shall send your letter on to the agency to show that Jerry has some friends if and when an opening should occur. Actually, the team seems set with (Vin) Scully, (Connie) Desmond and (Al) Helfer unless we have to use one of them on our pitching staff.” McLendon had sent a letter to O’Malley regarding Doggett’s qualifications several days earlier. “As far as I am concerned, Jerry is not only a very nice and tractable guy but also perhaps the most competent minor league broadcaster there is today. I am real impressed with Jerry and his abilities and just wanted to say that if anything ever turns up on the Dodgers broadcasting staff, I think you really could score a ten-strike by putting Jerry on as one of the team.” Doggett was hired in 1956 and continued to work with partner Vin Scully for the next 32 seasons until his retirement in 1987. 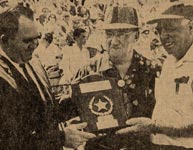 In a presentation at Dodgertown’s Holman Stadium in Vero Beach, Florida, Walter O’Malley receives a lifetime membership plaque from the Florida Sheriff’s Association, presented by Sheriff Sam Joyce. Dodger Director Bud Holman, for whom the stadium was named, was also on the field for the ceremonies. 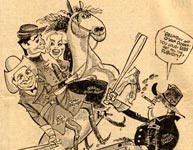