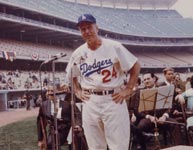 Grand Opening dedication ceremonies of Dodger Stadium for invited guests, sponsors and media are held beginning at noon. Earlier in the day, in ceremonies on the steps of City Hall in Los Angeles, Councilman Harold Henry and L.A. County Supervisor Ernest Debs presented Walter O’Malley with documents for inclusion in a time capsule at Dodger Stadium. In his speech, Baseball Commissioner Ford C. Frick described O’Malley as a man “with courage, imagination and stamina to move a mountain. When you see that thing out there, that stadium, then you will visualize the answers to some of those crybabies who say baseball is dying.” Following the events at City Hall, a parade and motorcade were held to Dodger Stadium, where Commissioner Frick told the invited guests, “I watched this stadium being built, and I still can’t believe it. This edifice is one of the most important steps in a new era in the game.”Bob Hunter, The Sporting News, April 18, 1962 Dodger broadcaster Vin Scully serves as master of ceremonies at Dodger Stadium and guest speakers included Cardinal James Francis McIntyre, Harold “Chad” McClellan, Commissioner Frick, National League President Warren C. Giles, Los Angeles Angels President Bob O. Reynolds, Los Angeles Mayor Sam Yorty (who made a special presentation to former Mayor Norris Poulson), Tom Harmon, Walter Alston, Duke Snider and Rabbi Edgar F. Magnin. O’Malley then responded to all of the speakers. 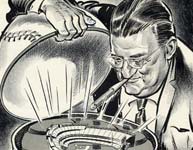