Walter O’Malley sends a letter of congratulations to Captain Eddie Rickenbacker, America’s ace fighter pilot and President of Eastern Airlines, stating, “All of the Brooklyn Dodgers extend to you sincerest congratulations on Eastern Airlines Twenty-fifth Anniversary. As an organization we are most appreciative of the extraordinary courtesies and accommodations extended to us over the years by your fine company, by you personally, (Eastern Director) Bud Holman and (Eastern Vice President) Jack Frost.” 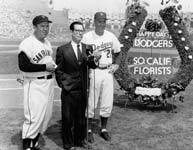 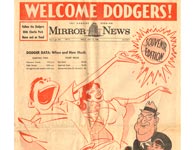 The Los Angeles Evening Mirror News prints a souvenir edition welcoming the Dodgers to L.A. for the first season of Major League Baseball. A smiling Walter O’Malley is depicted in a cartoon with several Dodger players and fans greeting their new team with open arms.

The Sporting News prints this editorial shortly after Dodger Stadium opened for National League play on April 10, 1962: “The Dodgers’ new home in the West was unveiled on opening day and drew unrestrained praise from everyone who saw it. Commissioner Ford Frick used just one word — ‘incredible’ — to describe his feelings about the stadium Walter O’Malley built...the Dodgers won a remarkable race against time to have the park in shape for use. A long siege of bad weather in Los Angeles had raised doubts that it could be done. This is the first stadium built by a baseball owner in 40 years. O’Malley and the Dodgers had to fight many battles to achieve this dream. The beautiful stadium is a fine tribute to Walter O’Malley and his associates.”The Sporting News, Editorial, April 18, 1962