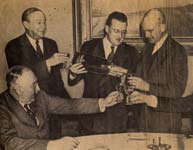 Attorney Walter O’Malley serves as Chairman of the Committee for the Diamond Jubilee celebration of the Brooklyn Club. O’Malley’s father-in-law, former Justice Peter B. Hanson also is on the committee. The Brooklyn Eagle noted, “Dr. A. Cooke Hull is conceded to have been the man with the Brooklyn Club idea, back in those days of top-hatted business men and bewhiskered physicians. Life in Brooklyn had become hectic, with the boom brought on by the Civil War, and Dr. Hull yearned for a quiet place where he and a few friends might meet.”Jane Corby, Brooklyn Eagle, April 11, 1940 In celebrating the Diamond Jubilee, the Brooklyn Club invited ladies to attend an event for only the second time in its 75-year history.

In a memorandum to Vero Beach groundskeeper O.B. “Smitty” Smith, horticulturist Walter O’Malley writes, “Be good enough to rake up a bushel basket of Tifton sprigs. These can come up (to Brooklyn) on the plane...at the end of this week and I will pick it up at the airport. One way of getting the sprigs would be to use a hard iron rake on the section of the stadium outfield. After the sprigs are raised above the ground they can be cut with hand clippers, or with your Montemower I sent. I am anxious to see if this grass will establish itself up here (at Brooklyn’s Ebbets Field) and one bushel would be sufficient.”

Dick Young writes in The Sporting News that Dodger broadcaster Vin Scully “is one of the most glittering radio men to hit baseball in years — factual, glib and colorful — without being a screamer.” Young also mentions in his column that the Brooklyn Dodger Yearbook is dedicated for the first time to a Dodger player. The player is pitcher Arthur (Dazzy) Vance, the first Dodger to be elected to the National Baseball Hall of Fame. Young also states that Walter O’Malley planned to make a request of baseball for an early date for the Dodgers’ home opener, the way the Washington Senators and the Cincinnati Reds have done. O’Malley said, “We are in a three-team city (New York Yankees and Giants) and always open in direct competition to one of the other two teams. This could be averted by granting Brooklyn a Monday opener.”Dick Young, The Sporting News, April 20, 1955

While the Dodgers play their most exciting game in Los Angeles against the San Francisco Giants, Dodger President Walter O’Malley is a speaker at a dinner honoring Los Angeles County Sheriff Peter Pitchess. Trying to keep his mind on the proceedings was difficult, as O’Malley also attempts to track each inning of the game at the Los Angeles Memorial Coliseum via radio reports from his friend Paul Karras. After a first inning home run by Willie Mays, Dodger right-handed pitcher Don Drysdale shut down the Giants on a three-hitter and struck out a career-high 11. But, the Dodgers who tied the score 1-1 after two innings, did not score again until the bottom of the ninth on a home run by second baseman Charlie Neal. As soon as the dinner ended at the Ambassador Hotel, O’Malley tried to drive back to the Coliseum in time to watch the end of the game, but he missed it. He stated, “It was my biggest baseball thrill since coming to Los Angeles.”George T. Davis, Los Angeles Herald Express, Sports, April 21, 1959

Walter O’Malley and Robert O. Reynolds, President and co-owner of the Los Angeles Angels, formally execute a lease agreement for new Dodger Stadium as the site of Angels’ home games for the 1962-65 seasons.