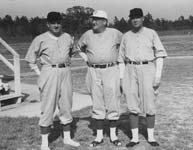 Fred Young writes for The Sporting News that when an all-star team of young Dodger minor leaguers played the Dodgertown instructors in an exhibition game at Holman Stadium, Dodger officials who had played professionally were in the lineup including Fresco Thompson, Andy High, Goldie Holt and John Corriden. Every team needs a hard-working batboy and the camp staff named one on its lineup card. “O’Malley” it read. As in Dodger President Walter O’Malley. Young writes, “When Thompson booted a perfect double play at second base, ‘Batboy’ O’Malley roared: ‘Thompson, you’ll be selling peanuts at Ebbets Field when the season opens!’”Fred Young, The Sporting News, April 7, 1954 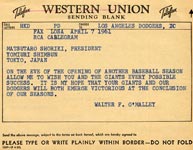 Walter O’Malley writes a telegram to Matsutaro Shoriki, publisher of the Yomiuri Shimbun and the “father” of professional baseball in Japan: “On the eve of the opening of another baseball season allow me to wish you and the (Yomiuri) Giants every possible success. It is my hope that your Giants and our Dodgers will both emerge victorious at the conclusion of our seasons.” The 1961 Yomiuri Giants were invited guests of the Dodgers during Spring Training at Dodgertown in Vero Beach, Florida. 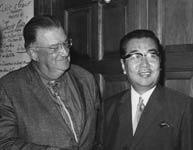 Toru Shoriki, owner of the Yomiuri Giants, writes a thank you letter to Walter O’Malley as several of his personnel visited Dodgertown in Vero Beach, Florida during Spring Training. “I am deeply grateful to you and the Dodgers’ staff in taking good care of my boys at Vero Beach,” said Shoriki. “Professional baseball in Japan also needs ‘new blood’ and I am sure, these boys will (be) stars of tomorrow. We have a long and trying season ahead but I am confident of making it four straight (Japan Series titles).” The Giants did, in fact, win the 1968 Japan Series for the fourth consecutive season, after winning the Central League championship for the fourth straight time.