In a memorandum, Dodger Assistant General Manager Red Patterson summarizes comments made by Walter O’Malley to Frank Schroth, editor of the New York News and Charles J. Mylod, Chairman, Brooklyn Sports Center Authority, at a luncheon. According to Patterson: “O’Malley went on record that the Brooklyn ball club was ready, willing and able to build a new Stadium either in Brooklyn or Los Angeles. ‘The Brooklyn Dodgers will have a new ball park,’ O’Malley said. ‘We will play our schedule of games somewhere. I will continue down the road toward that ball park until I reach a fork in the road. At that time I must decide which road to take, leading toward Los Angeles or to the new park in Brooklyn.’ Mr. Mylod said there had been some confusion and delay in the Sports Center Authority activities but that he was happy to report a contract for the services of Madigan-Hyland, Consulting Engineers, with the Authority was about to be signed. This contract was in connection with the financial feasibility study and report relating to a stadium in the area bounded by DeKalb Avenue, Vanderbilt Avenue, Sterling Place and Bond Street in the Borough of Brooklyn.”

The Los Angeles Dodgers will televise all 11 games against the Giants from San Francisco on KTTV Channel 11, according to Walter O’Malley. “It is being done as a public service,” said O’Malley. “The Dodgers will derive no revenue from the telecast of these games.”Clifford Kachline, The Sporting News, April 8, 1959 Broadcasters Vin Scully and Jerry Doggett handled the 11 televised games, as well as all games on KMPC Radio AM 710.

Walter O’Malley receives an award for traveling more than 100,000 miles on United Airlines from Robert Schenz, United Airlines sports representative who made all charter flights with the Dodgers. It was stated that O’Malley had flown more than 600,000 miles on United in his lifetime. Schenz later became the Dodgers’ Director of Transportation and the Stadium Club and served the team in that capacity until 1988.The Sporting News, April 8, 1959 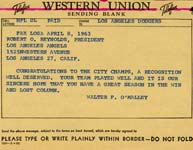 Walter O’Malley sends a Western Union telegram to Robert O. Reynolds, President and co-owner of the Los Angeles Angels, who also played home games at Dodger Stadium in 1962 and were preparing for another season there. The Angels defeated the Dodgers twice in Spring Training exhibition contests in 1963. O’Malley writes, “Congratulations to the City Champs, a recognition well deserved. Your team played well and it is our sincere hope that you have a great season in the win and lost column.”

In his letter of appreciation to Bob Hope, Walter O’Malley writes, “It was good of you to take on the Friday night chore at the Baseball Writers Dinner and I want you to know that we all appreciate it. The demands on show folks like yourself are such that I am always amazed when you say ‘yes’ to a request instead of the understandable ‘no.’”