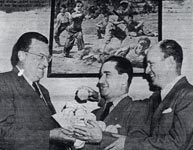 Walter O’Malley provides tickets to 400 Venezuelan military cadets for the Dodger game at Ebbets Field on this date. O’Malley’s invitation to the cadets came on Simon Bolivar Day, a national holiday of independence in Venezuela. The tickets were presented to Antonio Davila-Delgado, Venezuelan Consul General and Dr. Pedro Zuloaga, a representative of the Cerveceria Caracas club of the Venezuelan Winter League. 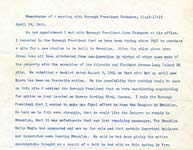 After meeting with Brooklyn Borough President John Cashmore, Walter O’Malley writes a file memorandum of the conversation. In it he explains, “I reported to the Borough President that we (the Dodgers) have been trying since 1947 to purchase a site for a new stadium to be built in Brooklyn...I told the Borough President that I wanted to make one final effort to keep the Dodgers in Brooklyn. He told me he felt very strongly, that he would like the Dodgers to remain in Brooklyn, that it was unfortunate that our last remaining newspaper, The Brooklyn Daily Eagle had suspended and was up for sale and that certain important business and industries were leaving Brooklyn...The Brooklyn plan provides for the elimination of the traffic hazard at Atlantic and Flatbush Avenues. It provides for a new LIRR depot and will permit the new passenger cars to come into Brooklyn. The Ft. Greene (Meat) Market Men’s Association can be accommodated at its present site under sanitary and efficient circumstances. The Dodgers will have a new stadium and the franchise will remain in Brooklyn. Plans accomplishing the above have been prepared under the direction of Walter F. O’Malley, President of the Brooklyn Dodgers (and) by Capt. Emil Praeger, Kavanagh, Waterbury, engineers and architects.” 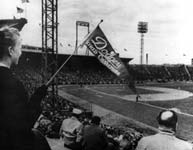 The Brooklyn Dodgers play their first home game in Jersey City, New Jersey’s Roosevelt Stadium, beating the Philadelphia Phillies, 5-4. It was the first of seven games (one against each National League opponent) in 1956 to be played away from aging Ebbets Field. Walter O’Malley had signed a lease agreement for use of Roosevelt Stadium in August 1955, when he announced his intentions for selected home games, stimulating discussion about building a new ballpark in Brooklyn. Also at this game, a camera was placed directly behind the batter’s box at ground level for the WOR-TV telecast, giving the viewer a peak at pitches right behind the catcher and umpire. It was the first time this angle was used because of the physical layout of Roosevelt Stadium which was flat. At Ebbets Field, the ground sloped upward from the grandstands to the pitcher’s mound, thus distorting the eye-level view.

According to an Associated Press story, “Another tentative proposal to build a new ball park in the city for the Brooklyn Dodgers — this time in the Borough of Queens — drew a terse and cool response today from Dodger President Walter O’Malley. ‘If and when this latest reported possibility ever achieves political maturity, I will be pleased to discuss it in detail,’ said O’Malley in a statement issued by the club.” O’Malley toured the proposed location, which was the site of the 1939 World’s Fair, with Robert Moses, Parks Commissioner for the City of New York. The city-owned 78-acre property was being used for commuter parking.

The Los Angeles Examiner runs the lengthy play-by-play account of the first Dodger home game ever played, below a photo of Walter and Kay O’Malley and California Governor Goodwin Knight and his wife sitting at the opener at the Los Angeles Memorial Coliseum.

Walter O’Malley writes a letter to be included in the San Gabriel (CA) Babe Ruth Baseball League souvenir program in which he states, “I wish it were possible for all fourteen of your teams to finish first but in the Babe Ruth League, as in the majors, some clubs have to be in the second division when the final standings are written. However, just playing in such a well-organized, well-disciplined, well-coached League is a wonderful thing for boys of your age. Make the most of it and rest assured major league scouts will be watching many of your games. There is one promise I can make to all fourteen teams. I would like all you boys and all your coaches and adult supervisors to be my guests at a ball game some time during the season.”

R. Buckminster Fuller sends a letter to Walter O’Malley asking if O’Malley could meet with him the day before Fuller departs Los Angeles for Tokyo, Japan. Fuller was to produce two 200-foot domes for the Yomiuri Press, owner of the Yomiuri Giants. Fuller was to complete a clubhouse for the Yomiuri Country Club and Shoriki Hall in Takaoka City, before the Giants were to consider his design for a 750-foot dome stadium for the Giants. Fuller writes to O’Malley, “I would love to see you again before departing to give you more details on the undertaking.”

Julia Stearns Dockweiler, President of the Los Angeles Orphanage Guild, writes a letter to Walter O’Malley to thank him for his “generous gift of five hundred tickets...The Sisters and children join the Guild in appreciation and best wishes to the Dodgers for a successful season.”