On behalf of Roy Campanella, Walter O’Malley writes a note “TO THE DODGER ORGANIZATION” regarding the previous night’s exhibition game played as a tribute to the legendary Dodger catcher, before a major league record crowd of 93,103 in the Los Angeles Memorial Coliseum. O’Malley states, “Roy and I deeply appreciate the extra effort that everyone put into last evening’s program. We can all be proud that it was a dignified occasion, well conducted and promoted in good taste. Department heads in our different front offices and at the Field will please Roy and me very much if they will pass on to each of their staff our thanks for their historic effort. Sincerely, for Roy and Walter F. O’Malley, President.” 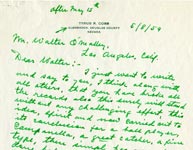 Baseball Hall of Fame center fielder Ty Cobb handwrites a letter to Walter O’Malley (in his trademark green ink) regarding the exhibition game organized by O’Malley to pay tribute to Roy Campanella. “I just want to write and say to you, I think along with all others, that you have broke all the records also this surely will stand without any challenging effort, this idea, spirit and now carried out to its conclusion for a ball player, Campanella, a great catcher, a fine type, there simply has never been done before. I feel deeply towards you for this, a great and grand act. I am happy your club is up in the running, you deserve a pennant fight right down to last day. I have followed the travail you have endured to bring Major League baseball to Los Angeles, you can comfort yourself with being sure, the few off siders there who tried to throw obstacles in your plans, are much in minority and they amount to so little. Every good wish to you personally, I am, Sincerely, Ty Cobb” Known as “The Georgia Peach,” Cobb had legendary baseball statistics in his 24-year career — a .367 batting average, 4,191 hits, 12 batting titles (including nine in a row), 2,245 runs scored and 23 straight seasons in which he batted over .300.

Kay and Walter O’Malley are guests at a black tie dinner honoring Mr. and Mrs. Bennett Cerf in Beverly Hills. Cerf, the founder and publisher of Random House, made frequent appearances on TV’s popular game show, “What’s My Line?”

Renowned lyricist Sammy Cahn donated a coat rack for the Dodger Stadium President’s Box and Walter O’Malley writes him to acknowledge the gift. “My dear Sammy: I notice that something new has been added and many thanks for it. Come out and see me when you are in town. All the best.”