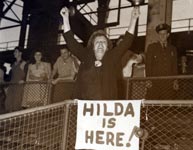 Walter O’Malley sends a Mother’s Day bouquet of flowers to Hilda Chester, the leather-lunged, cowbell-ringing Dodger fan, during the game at Ebbets Field. After Roy Campanella had homered in the game against the Phillies, O’Malley ordered the flowers for Hilda as she sat near the Phillie dugout. She had dyed her hair red in the off-season and O’Malley’s note with the flowers said, “To Brooklyn’s newest redheaded mother.” Chester displayed her huge bouquet to fans long after the game had ended and told everyone she could, “Now wasn’t that the nicest thing for Mr. O’Malley to do.”Roscoe McGowen, The Sporting News, May 20, 1953 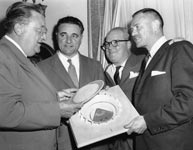 Along with San Francisco Mayor George Christopher, New York Giants’ owner Horace Stoneham and S.F. County and City Supervisor Francis McCarty, Walter O’Malley reviews a small model of a domed all-weather stadium he would like to build for the Dodgers in Brooklyn. During the meeting at the Waldorf-Astoria Hotel in New York City, discussions ranged from building the stadium, to the possible relocation of the Giants by Stoneham to San Francisco. McCarty also chaired San Francisco’s Major League Baseball Committee. Baseball Commissioner Ford C. Frick decreed a virtual news blackout on the results of the meeting.

Editor and Publisher of The Sporting News J.G. Taylor Spink visits Los Angeles and writes of the enormity of the on-going efforts to build Dodger Stadium, the new home of the Dodgers. “We found on our visit to L.A. the most staggering operation the game has ever attempted,” writes Spink. “Comparing the Dodgers’ park to Yankee Stadium, which was built on level ground, is like comparing the building of the Panama Canal to the Gowanus Canal...What a man! It left me with a glow for the future of the game in this baseball hungry city and his (O’Malley’s) super-stadium will be a lasting memorial to a man with the zeal of a pioneer, the ingenuity and imagination of an engineer and the know-how of an exceptionally shrewd, successful businessman.” O’Malley also releases the information that for the first time in Dodger history, the home team will be located on the third base side on a Dodger home field. The Dodger dugout was on the first base side in Ebbets Field and at the L.A. Memorial Coliseum.

Bob Oates of the Los Angeles Examiner writes a feature on Dodger concessionaire Danny Goodman which is printed in The Sporting News. Goodman is asked who has been his favorite customer in his distinguished 36 years in concessions. “Walter O’Malley,” said Goodman. “He buys at least one of everything.”Bob Oates, The Sporting News, May 10, 1961

Legendary tennis player Jack Kramer meets with Walter O’Malley and his executive assistant Jeane Hoffman regarding the possibility of tennis matches at Dodger Stadium. Hoffman was hired a week earlier to find creative ways to promote the non-baseball use of Dodger Stadium. Kramer, who won the 1947 Wimbledon singles title and the 1946-47 Wimbledon doubles title, became a promoter of the sport and was enshrined in the International Tennis Hall of Fame in 1968.