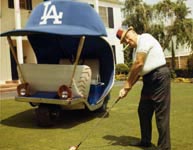 To his friends and business associates, Walter O’Malley assures all that his health is fine with the following note and photograph in front of his Los Angeles home. “This picture was taken on my return home from Methodist Hospital, Mayo Clinic. The deterioration in my golf swing should be seriously evaluated when it comes to fixing the additional number of strokes I will expect for the next 12 months. You were so considerate while I was sidelined. Kay, Peter, Terry and I are most thankful. And all is well!” Also, in the Chairman’s Box as his guests for the Dodgers-Giants game were Ira Hoyt and his wife Peg. Hoyt was involved in the on-site engineering of Dodger Stadium during its construction.