Walter O’Malley types a letter from Culver Military Academy in Culver, Indiana to his mother Alma. He tells her the invitations are out for commencement exercises to be held on June 3. The final formation and presentation of diplomas takes place on June 7. O’Malley writes, “The rest of the Battery is on a thirty mile hike; the three day maneuver being called off. I did not go as I have to use this Sunday for the purpose of studying...At any other time I wouldn’t worry but it is too near Commencement to risk falling in the lower half of the class. As I read this over it seems a bit alarming — well, it isn’t in the least but I want a safe margin. Yes, I have the camera all primed and loaded and ready to take ‘The O’Malley’s at Culver’ — you must take a picture of everything that happens as Cadet O’Malley will be pretty busy seeing that the Headmaster doesn’t forget his sheep skin.” 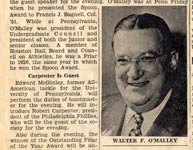 Returning to his collegiate roots, Walter O’Malley is the featured speaker at the Annual Spring Dinner of the Friars Senior Society of the University of Pennsylvania. O’Malley, Friar class of 1926, highlights a sports-themed program, which includes Robert M. Carpenter, President of the Philadelphia Phillies as a guest and Edward McGinley, a former Penn All-America tackle, as toastmaster. As an undergraduate, O’Malley was President of his junior and senior classes, President of the Undergraduate Council, baseball member of the Council on Athletics and recipient of the Spoon Award as outstanding overall student.

Jacob J. Schwartzwald, Justice of the City Court of the City of New York, invites Walter O’Malley to serve as the honorary chairman for the American Fund for Israel Institutions “Music Under the Stars” Concert at Ebbets Field on June 17.

Walter O’Malley sends a letter to nine-year-old fan Tim Alpers of Bishop, California, who mailed a letter and one dollar to O’Malley and wanted to know if the Dodgers could send a picture of all the players, including Duke Snider, his favorite player. Tim also writes, “My school is so small that girls have to play on the baseball team. That’s bad isn’t it? Good-by, Tim ” O’Malley responds, “I just received your nice letter and I was glad to know that the Dodgers have at least one very loyal fan in Bishop. I am returning your dollar to you Tim but I will send you a copy of our 1958 Dodger yearbook so you can read about your favorite players — especially Duke Snider. Good luck to you in school and on your baseball team Tim.”

In a letter to woman umpire Christine Wren, Walter O’Malley writes, “We were all pleased to learn that you had been assigned to the Class A Northwest League. Peter (O’Malley), I and all our Dodger staff wish you well and you so favorably impressed us at Vero Beach last spring.” Wren worked behind home plate for the exhibition game between the Dodgers and the University of Southern California Trojans on February 16, 1975 before a packed house at Dodger Stadium.

Upon receipt of photographs from sportswriter Sotaro Suzuki, a close friend and a member of the Japanese Baseball Hall of Fame, Walter O’Malley responds with a letter to him and his wife Toku. “One of the nicest things that could have brightened my day was to receive the beautiful photographs of Toku and Sotaro taken on the occasion of Sotaro’s 89th birthday celebration. The pictures are beautiful and you each look to be very healthy and content. Kay and I send you our warmest regards for many years of continued health and happiness.” Suzuki is widely credited for developing international relationships (including the arrangements for six major league tours to Japan) and for the growth of the game in Japan.