The Sporting News takes time out to salute Walter O’Malley in an editorial due to his kindness in memory of a former major league player. O’Malley allowed family and friends of the late Ken Hubbs to sell tickets to a Dodger game to help fund a youth center in memory of the deceased Chicago Cub player. The agreement was half the receipts of the Dodger tickets sold would go to the youth center in Colton, California. However, after the tickets were sold, O’Malley donated the Dodgers’ share to the Hubbs Foundation. The editorial stated, “O’Malley, owner of the Dodgers, is one of the most maligned men in baseball for some obscure, unexplainable reason. He is a sound businessman, has built a tremendous ball park in Los Angeles and is prospering as a result. This should be no discredit, yet these things are held against him. His splendid gestures are often overlooked, but they should be noted to balance the books.”Editorial, The Sporting News, May 23, 1964 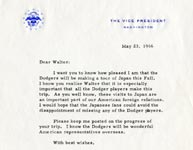 United States Vice President Hubert H. Humphrey writes to Walter O’Malley: “I want you to know how pleased I am that the Dodgers will be making a tour of Japan this Fall. I know you realize Walter that it is especially important that all the Dodger players make this trip. As you well know, these visits to Japan are an important part of our American foreign relations. I would hope that the Japanese fans could avoid the disappointment of missing any of the Dodger players. Please keep me posted on the progress of your trip. I know the Dodgers will be wonderful American representatives overseas. With best wishes. Sincerely, Hubert H.”

Walter O’Malley makes a guest appearance on the popular “Joey Bishop Show” at ABC Studio in Los Angeles. The next day, William Bartholomay, Chairman of the Atlanta Braves pens a letter to O’Malley saying, “I rarely watch late night television, but as one of your greatest fans I had to see you on the Joey Bishop Show last night. You were absolutely superb and I got a big kick out of it.”