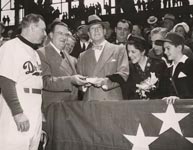 Five-star General Douglas MacArthur visits Ebbets Field in Brooklyn, his first appearance since his return from the Korean War as Supreme United Nations Commander. Relieved of his duties on April 11 by President Harry Truman for public disagreement regarding politics and war strategy, Gen. MacArthur received a hero’s welcome around the country, including in New York City with a huge parade staged in his honor. Along with his wife and son Arthur, Gen. MacArthur receives a lifetime gold pass to Ebbets Field from Dodger President Walter O’Malley. Mrs. MacArthur accepts a beautiful orchid corsage from Kay O’Malley. 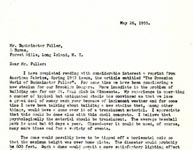 Walter O’Malley corresponds with designer, inventor R. Buckminster Fuller about his ideas for a dome stadium of translucent materials in Brooklyn. Fuller invented and patented his geodesic dome in 1954. O’Malley’s preferred location for the new stadium was at the intersection of Atlantic and Flatbush Avenues. O’Malley further writes in this letter to Fuller, “I am not interested in just building another baseball park.”

Walter O’Malley issues a lengthy press release recapping the good faith efforts that the Dodgers have made since arriving in Los Angeles, following the contractual agreement with the City and County of L.A. A referendum, “Proposition B”, is to be voted on in the next week to determine if the previously agreed upon contract between the City and the Dodgers will remain in force. O’Malley concludes in the release, 1. We will fight to stay in Los Angeles. 2. There is neither the time nor the willingness on either side to renegotiate what is already a fair contract — and suffer the chance of still another referendum election. 3. The National League — and not the ball club — controls the franchise. They could force us to move if we cannot provide the home we promised them in 1960. 4. We have fulfilled and will fulfill all conditions of the contract — and are confident that the voters will want to do likewise.”

Actor-comedian Joe E. Brown described Walter O’Malley’s efforts and goals to build a new baseball stadium in Los Angeles. Brown served as the general chairman of the Taxpayers Committee for Yes on Baseball, the referendum to approve the contract between the City of Los Angeles and the Dodgers. Brown said O’Malley wanted to “make this the baseball showplace of the world, and preliminary plans indicate it will be just that.”Los Angeles Times, May 25, 1958

Actor and comedian George Burns, along with producer-director Mervyn LeRoy and his wife Kitty, are guests of Walter O’Malley in the Dodger Stadium President’s Box.