Plans for the fourth annual Atlantic Tuna Tournament at Belmar, New Jersey in August are near completion according to Chairman Walter O’Malley. The teams will be limited to a 24-thread line. A strong field of 15 teams is expected to compete.Raymond R. Camp, “Wood, Field and Stream”, New York Times, May 4, 1941

Max Watson of San Jose, California donated eucalyptus and dawn redwood trees to the Dodgers to be planted at new Dodger Stadium. Walter O’Malley thanks Watson in a letter stating, “I am delighted with the number of varieties of the eucalyptus and with the condition of the redwoods. It goes without saying that when all of these trees are planted and matured, they will immeasurably enhance the beauty of the Stadium. I want to thank you very much for your generosity in donating the eucalyptus trees and for the thoughtfulness and care which you gave to this project. I fully expect that in the future all these trees will be a source of great pleasure for countless people.” 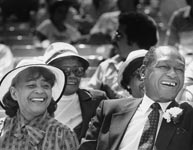 Los Angeles Mayor Tom Bradley and his wife Ethel are guests of Walter O’Malley in the Chairman’s Box at Dodger Stadium. Bradley was elected as the first Black Mayor in Los Angeles history in 1973 and won re-election for five terms through 1993.

George Steinbrenner, principal owner of the New York Yankees, said of Walter O’Malley on SI.com, “He was the smartest man I knew in baseball. He was a graduate of the same school I am, Culver (Military) Academy (a prep school in Indiana). In those days the A.L. (owners) sat on one side of the table, the N.L. on the other. It was like a declaration of war. And I remember him saying, ‘Mr. Steinbrenner is going to wonder why he ever got into baseball after sitting here listening to us.’ Well, what Walter O’Malley wanted, he got done.”