Returning to the University of Pennsylvania for Annual Class Hey-Day Exercises at The Irvine Auditorium, Walter O’Malley presents the 1951 Spoon Man Award to the outstanding overall student at Penn. O’Malley presented the award on the occasion of his 25th anniversary of receiving the same honor. In 1926, O’Malley was also Penn’s Senior Class President. 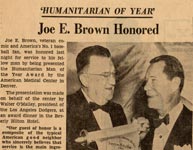 Comedian Joe E. Brown receives the Humanitarian of the Year award presented by Walter O’Malley at the annual banquet of the American Medical Center at Denver. O’Malley serves as dinner emcee for the event held at the Beverly Hilton Hotel. O’Malley told the crowd, “Our guest of honor is a composite of the typical good neighbor who sincerely believes that service is the main ingredient of good fellowship. If I could get Joe in condition after all the dinners he has to attend, I would add him to my pitching staff.” Los Angeles City Councilwoman Roz Wyman read a resolution commending Brown and the American Medical Center, a top cancer research organization in the West.“Joe E. Brown Honored”, Los Angeles Examiner, May 19, 1958

The Board of Trustees of Barlow Sanatorium Association sends Walter O’Malley a letter which includes a resolution passed by the Board at its May meeting. The Barlow Sanatorium is located just down the street from Dodger Stadium. The resolution reads, “RESOLVED that this Board expresses its appreciation to Mr. Walter O’Malley for the consideration and assistance given the Barlow Sanatorium during the period of construction of the Dodger Stadium. The Board is cognizant of the fact that when both contractors and the hospital met with mutual problems, they were often settled by concessions approved by Mr. O’Malley which gave necessary protection to the hospital. The Board is especially grateful for the gift of a parking lot on the hospital grounds which will accommodate both staff and visitors.”

An experiment in Dodger baseball on pay television was in the works as Walter O’Malley meets with Pat Weaver, the head of Subscription TV, who was a visionary in the field and the former President of NBC from 1953-55. Weaver, the father of actress Sigourney Weaver, and O’Malley debut the first game on Subscription TV, the Dodgers and Chicago Cubs on July 17, 1964.

Five thousand United States service personnel are guests of Walter O’Malley, as they watch the Dodgers defeat the Houston Astros 1-0 at Dodger Stadium. 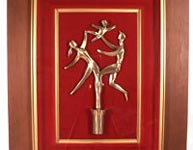 United States President Richard Nixon writes a congratulatory letter to Walter O’Malley which will appear in the printed program for the City of Hope hospital Tribute Dinner on June 4, 1972. O’Malley was to be honored with the “Spirit of Life” award at the dinner. “The name of Walter O’Malley is synonymous with the very best in America, and I am delighted to join with the Board of Trustees of the City of Hope and his countless admirers in honoring this distinguished citizen,” writes President Nixon. “Walter O’Malley is more than a pioneer in baseball. He is a man deeply concerned with the social problems facing our country today and he has translated this concern into meaningful, concrete action by giving much of his time and resources to civic and charitable causes.”