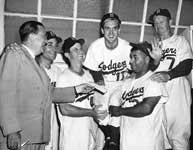 Following pitcher Carl Erskine’s 5-0 no-hitter over the Chicago Cubs, Dodger President Walter O’Malley showed his appreciation to the talented right-hander by presenting him with a $500 bonus check. Erskine would have pitched a perfect game, but for one walk. The player he walked on four pitches was none other than opposing pitcher Willie Ramsdell in the third inning. Just as the Cubs came to the plate in the fourth inning, a rain squall caused a 44-minute delay. But, Erskine didn’t miss a beat to blank the Cubs the rest of the way in one hour and 48 minutes before 7,732 fans at Ebbets Field.Harold Rosenthal, New York Herald Tribune, June 20, 1952 O’Malley also rewarded the fast-working grounds crew which got the field back to playing shape so the game could continue.Joseph M. Sheehan, New York Times, June 21, 1952 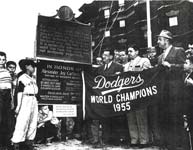 Walter O’Malley and Dodger Manager Walter Alston are present for the dedication of a plaque in Hoboken, New Jersey to honor Alexander Joy Cartwright on the 110th anniversary of the first standardized baseball game on the Elysian Fields. Cartwright is “credited with having established base lengths at 90 feet, a game at nine innings and a team at nine men.”The Sporting News, June 27, 1956

Public address announcer Tex Rickards tells a story about his relationship with Walter O’Malley. O’Malley once asked Rickards, a former vaudeville actor, what his salary was as P.A. announcer at Ebbets Field. “Five bucks a game,” replied Rickards. O’Malley immediately raised his salary. “Why did you not complain?” asked O’Malley of Rickards. “I like baseball,” said Rickards. Rickards also claimed that O’Malley gave him the raise because of the year O’Malley beat him in a fishing tournament. Rickards claimed that he caught a large fish in the 1938 Atlantic Tuna Tournament but O’Malley caught a bigger fish 10 minutes before the deadline and won the prize.J. G. T. Spink, “Looping the Loops,” The Sporting News, June 19, 1957