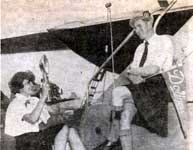 Alistair Forbes, a 23-year-old grain store employee, arrives from his native Aberdeen, Scotland to visit the Dodgers at Ebbets Field in Brooklyn. Walter O’Malley arranged for the week-long visit for Forbes, who had written the club on numerous occasions after listening to shortwave radio broadcasts of the Dodgers, his favorite team. He arrives at Idlewild Airport in a kilt and is greeted by the Dodger Sym-Phony Band. As a guest of the Dodgers, he was able to watch games and meet the players during the week. After he arrived home on July 5, he said he wanted to return to be the Dodgers’ bat boy in the 1952 “Woild Serious.” Forbes said, “If anyone says anything nasty about Americans I’ll bean ’em.”Associated Press, Sunday News, July 6, 1952

Walter O’Malley meets with New York Mayor Robert Wagner at City Hall to discuss his concerns for the new five percent admissions tax to be levied on sports teams, movies, theatres and other amusements. The tax, which Mayor Wagner signed into legislation on June 18, is estimated to yield $16,700,000 a year.New York Times, June 30, 1954

Dick Young writes in The Sporting News of the time Dodger third baseman Billy Cox bested Dodger President Walter O’Malley in a contract negotiation. One spring, Cox had not yet reported to Vero Beach, Florida for Spring Training because as Cox told O’Malley, “I’m just busy putting in some new rose bushes and shrubs around my home.” O’Malley agreed to pay for a gardener to do the work if Cox would report immediately to Dodgertown. One season later, Cox then returned his contract to O’Malley, again unsigned, and this time with a note that claimed O’Malley owed him money for the gardener to put in the roses. O’Malley paid the debt -- $1,000. “For that money,” said O’Malley, “Billy must have some mighty pretty roses.”Dick Young, The Sporting News, June 29, 1955 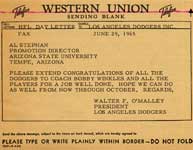 Walter O’Malley sends a congratulatory telegram to Arizona State University Baseball Coach Bobby Winkles on winning the NCAA Championship. On July 1, the university was to honor the coach on “Bobby Winkles Day.” “Please extend congratulations of all the Dodgers to Coach Bobby Winkles and all the players for a job well done. Hope we can do as well from now through October. Regards.” A future Dodger was on that ASU team — none other than outfielder Rick Monday.

Melvin R. Laird, the nine-term U.S. Congressman from Wisconsin, attends a Dodger game and is introduced to Walter O’Malley in Los Angeles. Seven months later, Laird was selected by President-elect Richard M. Nixon to serve as the 10th Secretary of Defense. He was the first member of Congress to occupy that position.