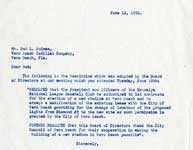 The Dodger Board of Directors passes the following resolution, “RESOLVED that the President and Officers of the Brooklyn National League Baseball Club be authorized to let contracts for the erection of a new stadium at Vero Beach and to accept a modification of the existing lease with the City of Vero Beach providing for the change of location of the proposed lights from Diamond #3 to the new site as such permission is granted by the City of Vero Beach. FURTHER RESOLVED that this Board of Directors thank the City Council of Vero Beach for their cooperation in making the building of a new stadium in Vero Beach possible.” Two days later, Walter O’Malley summarizes these two resolutions in a letter to Dodger Director Bud Holman in Vero Beach. The stadium at Dodgertown would later be named in Holman’s honor.

Participating in ceremonies for the new suspension monorail to be built at tourist attraction Santa’s Village near Lake Arrowhead, California, Walter O’Malley himself is “reportedly considering a monorail system” for Dodger Stadium. As part of the ceremonies, O’Malley takes a batter’s swing at the support pole for the monorail as construction begins. The monorail features cars, holding from four to six persons, constructed of molded fiberglass traveling some 1,300 feet on a four and a half minute trip.Los Angeles Times, June 11, 1961

Coleman Carroll, Bishop of the Diocese of Miami, acknowledges a contribution by Walter O’Malley to the 1963 Diocesan Development Fund. “The Development Fund will be used this year, primarily, for the building of a Home for Exceptional Children that will provide for the education and treatment of the emotionally disturbed child. Your support of the Fund helps to make possible the continued development of the educational and charitable institutions so needed.”

Maury Wills returns to the Dodgers in a trade from the Montreal Expos. Wills had been dealt following the 1966 season to the Pittsburgh Pirates, but Wills reclaimed his familiar number 30 as a Dodger. Vice President Al Campanis made the trade after consulting with Dodger Manager Walter Alston and Dodger President Walter O’Malley. O’Malley told Campanis, “What happened in Japan is in the past (when Wills left the team’s goodwill tour without permission). If you (Campanis) and Alston are convinced Maury will help the team, you have my blessing. Go out and get him.” Wills played four more seasons with the Dodgers and led them to second place finishes in 1970 and 1971.Bob Hunter, The Sporting News, June 28, 1969

Davey Lopes steals a base against the Montreal Expos and begin a major league record of most consecutive stolen bases with 38.