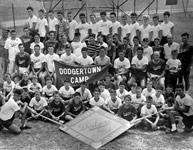 As an idea to utilize Dodgertown in Vero Beach, Florida year-round, Walter O’Malley established the “Dodgertown Summer Camp for Boys,” which had its first session from July 1-August 25. Nearly 200 boys from around the country attended the prestigious all-sports camp under the directorship of Les MacMitchell, a former New York University track star, along with some 50 counselors. Walter’s son Peter, 16, served as one of the counselors for the initial camp, while daughter Terry, recently graduated from New York’s College of New Rochelle, joined the camp administration as secretary.

In a letter to the editor of Newsday in New York, Walter O’Malley discusses the possible development of sponsored Pay-TV for baseball. He writes, “I would not object to paid TV being sponsored if such sponsorship would bring the cost of the program down. We pay to ride on the subway and yet we see paid ads. If there was no income from the ads going into the budget I assume that the fare would be higher. We buy a newspaper which is very largely dedicated to paid advertisements. Were it not for these ads I am sure the price of the newspaper to the subscriber would be higher than it is now. One can travel by automobile to New York from Philadelphia over the old network of roads or one can take the New Jersey Turnpike and pay a reasonable fee. The public apparently is willing to pay for something better in such a case. At different times I have tried to make my position clear to the effect that I would rather have subscription TV of baseball games than no TV.”

In his letter to recently traded Dodger pitcher Clem Labine, Walter O’Malley writes, “This is to tell you that I thought your note to the players was typical of a PRO — and that is what you are. The book itself tells the story of your courageous record with the Dodgers. You gave me and millions of fans tremendous thrills over the years. Best to you Clem and the family and keep it low and away.” Labine, who had a 70-52 record with the Dodgers, played on three World Championship teams — 1955 and 1959 Dodgers and the 1960 Pittsburgh Pirates.

In his personal appointment book, Walter O’Malley writes, “1000 Game” in reference to the Dodgers’ 1,000th game in Los Angeles since 1958.