A proposal to schedule interleague games by Cleveland General Manager and Detroit slugger Hank Greenberg is favored by Walter O’Malley. “I’m for it,” said O’Malley. “I’d like to see it tried on for size...I can approach this with complete unselfishness because the New York fan can see any ball club or any ball player he wants. It’s the one-team cities which might benefit most.” Greenberg’s proposal called for 18 games against each league opponent and four games with each team in the opposing league, with four games to be eliminated on a rotating basis to get to 154 total. 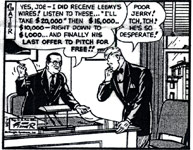 In Ham Fisher’s syndicated cartoon “Joe Palooka,” the Brooklyn Dodgers are prominently featured for the first of three consecutive days. The first comic strip features character Palooka and his baseball pitcher friend Jerry Leemy, who can’t wait to play for his beloved Dodgers. In the July 3 strip, Palooka decides to help his desperate friend Leemy by going to visit the office of Dodger President Walter O’Malley. O’Malley explains to Palooka that Leemy sent wires that he was prepared to pitch for $20,000, then $16,000, then $10,000, then $1000, then in his last offer, to pitch for free! Finally, on July 4, the comic strip features Palooka talking in O’Malley’s office about how Palooka was put on the spot by Leemy. Just after O’Malley invites his Vice Presidents Fresco Thompson and Buzzie Bavasi into his office to determine if there is an available minor league spot, and finds out there is one in Cedar Rapids if Leemy is interested, Leemy barges into O’Malley’s office and said “Interested? I’ll take it...No Questions Ast.” O’Malley’s secretary Edith Monak exclaims in the background, “I tried to stop him Mr. O’Malley!”

A proposal to schedule interleague games by Cleveland General Manager and Detroit slugger Hank Greenberg is favored by Walter O’Malley. “I’m for it,” said O’Malley. “I’d like to see it tried on for size...I can approach this with complete unselfishness because the New York fan can see any ball club or any ball player he wants. It’s the one-team cities which might benefit most.” Greenberg’s proposal called for 18 games against each league opponent and four games with each team in the opposing league, with four games to be eliminated on a rotating basis to get to 154 total.

The close but successful “Proposition B” balloting is released by district and of note is that all four San Fernando Valley Districts (First, Second, Third and Seventh) voted against the referendum, which ratified the previously approved contract between the City of Los Angeles and the Dodgers. The downtown (12th District), South-Central (Eighth District), West-Central (10th District) and east side (Ninth District) were all heavily in favor of “Proposition B.”Los Angeles Times, July 2, 1958 The city-wide referendum passed with 351,683 votes in favor and won by a majority of 25,785 votes.

While Los Angeles County Tax Assessor Philip E. Watson prepares to drastically increase the annual property tax burden on Dodger Stadium from $345,000 to $750,000 in one year, Pasadena Star-News columnist Rube Samuelsen writes about fairness to Walter O’Malley. “It need not be repeated here that O’Malley was asked to come to Los Angeles. He was not given a square inch of Chavez Ravine property. In exchange for acreage there, Los Angeles gained title to Wrigley Field. The Dodgers’ owner lived up to his commitments. The same can not be said for Los Angeles. Dodger Stadium has done more to bring outsiders to this area than any other attraction, Disneyland possibly excluded, yet O’Malley is still, so to speak, fighting for his life. As for Disneyland, it is open the year around while the Dodgers have but 81 home games (fewer dates, considering double-headers), which means approximately 22% of the year’s available days to balance the books. Questions are being asked about Assessor Watson. Has he also assessed the property around Dodger Stadium — property which displayed naught but shacks six years ago — equally?...Why, since no previous assessor had one, does Watson need a publicity man — rather, a woman in this case — even though she carries the title of field deputy?...Whatever the answers, it is high time Dodger Stadium, and everything pertaining thereto, is placed in proper perspective. A thing called honor is also involved.&#8221Rube Samuelsen, Rube-Barbs, Pasadena Star-News, July 2, 1963

Los Angeles Herald-Examiner baseball columnist Bob Hunter writes of the taxing problem Walter O’Malley is facing at Dodger Stadium — a potential increase of annual property taxes approximating $750,000. O’Malley said, “It has been accurately reported that the Dodgers are greatly concerned with the publicized proposed increase in real estate taxes on the Stadium property in Chavez Ravine. Before the club purchased it from the county and private owner for $3,000,000, the annual taxes were $8000. When the Dodgers entered into a contract to move their franchise to Los Angeles and build a stadium on the Chavez Ravine land, they inquired as to what the real estate taxes might be. They were advised the taxes would be between $300,000 and $350,000 per annum. All we want to do with the land is operate a first-class baseball stadium and park, and to maintain and landscape it in a clean and dignified manner.”Bob Hunter, Los Angeles Herald-Examiner, July 2, 1963

Walter O’Malley meets with Cardinal James McIntyre, who was the Roman Catholic Archbishop of the Diocese and Archdiocese of Los Angeles from 1948-70. In 1952, Pope XII appointed Archbishop McIntyre as the first Cardinal in the Western United States. Also with Cardinal McIntyre was Archbishop Patrick A. O’Boyle of Washington, D.C., who was appointed Cardinal three years later (June 26, 1967). 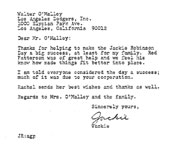 Jackie Robinson, who broke baseball’s color barrier in 1947 with the Brooklyn Dodgers and became the first African-American elected to the Baseball Hall of Fame in 1962, writes a letter to Walter O’Malley — “Dear Mr. O’Malley: Thanks for helping to make the Jackie Robinson Day a big success, at least for my family. Red Patterson (Dodger Assistant General Manager) was of great help and we feel his know how made things fit better into place. I am told everyone considered the day a success; much of it was due to your cooperation. Rachel sends her best wishes and thanks as well. Regards to Mrs. O’Malley and the family. Sincerely yours, Jackie.” The letter is typed on Freedom National Bank of New York stationery and Robinson is listed as “Chairman of the Board.” The Los Angeles County Board of Supervisors proclaimed “Jackie Robinson Day” on June 16 and a large banquet at the Biltmore Bowl was held. 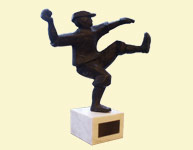 After receiving a gift of a baseball pitcher sculpture by Rien Goene from his friend Ross Cortese, Walter O’Malley thanks Cortese stating: “IT arrived — and just as I was sneaking out for a game of golf. It took all our department heads and 3 ball players to uncrate IT, and then from there the oohs and the aahs. We all think it great and on my return from a rather extended trip I will find its permanent spot in my office. Our engineer thinks it will not be necessary to build a pile foundation as we will support it with a sky hook. Seriously, Ross, your thoughtfulness is most appreciated and I am going to be real proud to have Rien Goene’s ‘baseball player’. It will be the only one I ever had not collecting social security.” Nationally-recognized builder Cortese was the founder and developer of the serene planned community for active mature adults “Leisure World Laguna Hills” in Southern California. On the inscription of the sculpture, Cortese writes, “To The Greatest Dodger Of Them All — Walter O’Malley. From Your Friend and Fan, Ross Cortese.”

Walter O’Malley writes to Frederick A. Schnell, Senior Vice President of The Prudential Insurance Company of America in Los Angeles, regarding the home sites surrounding an 18-hole golf course to be developed at Dodgertown in Vero Beach, Florida. “With Piper Aircraft plant employing 3000 workers only 1/4 mile from the site I am now more impressed with the mobile home possibility than with the original home plots. The new site is diagonally across Walker Avenue from the main Dodger spring training base and is not too far removed from the restaurant which the Dodgers own. The golf course layout in the present study is rather interesting because it has 4 greens, 4 tees, a driving range, tennis courts, ball fields, swimming pool and parking all radiating from the location we are thinking of for the eventual golf clubhouse. The yardage on the various holes can be modified considerably as we intend to have very long tees. Traps will be added when the course is otherwise completed so as to be placed where my opponents can be expected to hit their balls.”