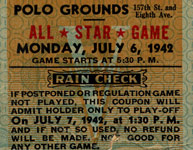 In The Sporting News, reader Roger Birtwell of Cambridge, Massachusetts writes a letter to the editor: “Read Dan Daniel’s column in the June 29 issue of The Sporting News — saying Bill Veeck, his scoreboard and his promotions are bush — and you’ll quickly understand why there is only one major league ball club in New York. Dan’s column is an unwitting revelation of the insular, provincial baseball spirit of New York. As a rather horrible country-meadow ball player, I at least grew up with spikes on my feet and a glove on my paw — we’ll skip the bat. I never knew how to use it. Ditto the typewriter — but I think I know what is baseball and what is America. Civilization is moving westward — something the Dan Daniels and George Weisses can’t quite comprehend. A contributing factor to the shifting of several major league franchises also may have been the dull baseball writing — hackneyed, soporific — in the cities from whence the franchises departed. And I don’t except Boston. Here’s to Walter O’Malley — who helped make pro baseball a NATIONAL game.”The Sporting News, July 6, 1960

Some 2,500 Sisters of the Archdiocese were hosted by the Dodgers and Walter O’Malley at Dodger Stadium. The hospitality included tickets, parking, a scorecard, Dodger yearbook, hot dogs, soda, peanuts, popcorn and ice cream bar.