Walter O’Malley tells the Los Angeles Times that geographic expansion of Major League Baseball is inevitable. O’Malley said that he favors a plan that would present two nine-team leagues playing in three six-team divisions, with interleague play. “Under this plan, every major league city would get to see the Yankees, Dodgers, Braves, White Sox and all the other clubs of both leagues,” said O’Malley.Frank Finch, Los Angeles Times, July 9, 1960

“Chef” Walter O’Malley thanks his young granddaughter Carol Seidler for supplying him with starter for sourdough bread. “You must be a mind reader as my original sourdough starter finally ran out. Your new supply was put to work last weekend and while the first batch of bread was not up to our mountain standards it should be better the next time as the starter will have had more time to ferment. Many thanks.” 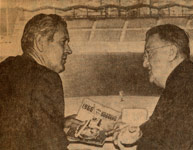 John Connally, the 38th Governor of the State of Texas, visits Dodger Stadium and Walter O’Malley during the Governors’ Conference in Los Angeles. On November 22, 1963, Connally was wounded as he rode in President John F. Kennedy’s limousine as it headed down Elm Street in Dallas. Like President Kennedy, who was shot in the head and left shoulder, both men were rushed to separate emergency rooms at Parkland Memorial Hospital. Connally suffered wounds to his back, chest, wrist and thigh. He fully recovered and was re-elected in 1964 and 1966. A Democrat, Connally switched his allegiance to the Republican Party and, in 1971, was appointed Secretary of the Treasury by President Richard M. Nixon. 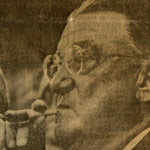 Walter O’Malley attends the 1968 All-Star Game at the Astrodome in Houston, Texas. The National League scored a first-inning run and made it stand up to win, 1-0. The next day he attends a National League meeting, followed by a joint major league meeting. 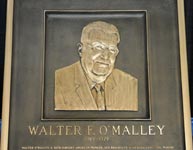 A bronze plaque commemorating the achievements of Walter F. O’Malley is unveiled in the prestigious “Coliseum Court of Honor” by the Los Angeles Coliseum Commission.

The O’Malley bronze plaque is only the 55th one that the Coliseum Commission has awarded. Located on a column at the Coliseum’s peristyle end, the recognition is designed to “commemorate outstanding persons or events, athletic or otherwise, that have had a definite impact upon the history, glory and growth of the Los Angeles Memorial Coliseum.” The bronze plaque is five feet tall and weighs 500 pounds.