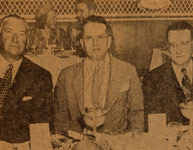 Walter O’Malley has a meeting with New York Mayor William O’Dwyer. Mayor O’Dwyer was the City’s 100th Mayor and served from 1946-50. Both O’Malley (in 1930) and O’Dwyer (1923) graduated from Fordham University Law School by attending night classes.

For the second time in five seasons, Dodger first baseman Steve Garvey is named Most Valuable Player Award of the All-Star Game. Garvey collected two hits and two RBI in the National League’s 7-3 victory in San Diego. He first won game MVP honors in 1974 when he made the team that year as a “write-in” candidate on the ballot, collected two hits and drove in a run.