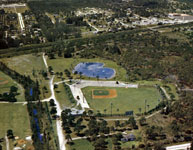 The contract to build Holman Stadium in Vero Beach, Florida is awarded to H.J. Osborne, who had 90 days to complete the “grading, concrete, fill work, ramps and fence.” The stadium was designed by Capt. Emil Praeger. Other contracts were awarded by Walter O’Malley to complete the seats, press box, lights and refreshment stands. The seating area was originally to be 4,200, but it was later expanded to 5,000 capacity. In other Vero Beach news, Jesse L. Swords, President of Swords Brothers-McDougal Co., Inc. writes to O’Malley, “Mr. Bud Holman of this City has asked us to get some information for you regarding a fish pond on your property here. This is what we have learned: Mr. F. E. Boyer, Jr., Soil Conservation Service, U.S. Dept. of Agriculture...to-day advises us that your pond should be at least one acre in area and average at least five feet or more in depth to (be) OKed by them. He further states that his department cannot stock it for you as your pond would not come under the Agriculture Dept. but that you could without any trouble have it stocked by the Wild Life Department of the U.S. as it falls under their Department.” O’Malley’s heart-shaped lake indeed was fully stocked and available for fishing by the spring of 1953.

Dodger Director Public Relations and Promotions Red Patterson writes a note to Mario Valadez, who had taken the liberty of having Walter O’Malley’s hand-writing analyzed, at historic El Pueblo De Los Angeles at Olvera Street, stating, “Mr. O’Malley was sincerely pleased by the hand-writing analysis you sent him. Olvera Street is one of his favorite haunts.” The analysis said, “Your handwriting shows you to be a self-made man. One who has fought his way to the top through hard work and hard knocks. Basically, you are an extrovert who has learned to control the emotions and feelings, permitting the head to rule, rather than the emotions. You have acquired a ‘poker face’ so to speak, to hide the emotions and feelings that you usually experience, especially so, in a business day...Your writing shows an analytical mind; you must be satisfied with every detail. Originality, determination and the ability to turn ideas into realities, show in your style of writing. You have always been independent and prone to be more on the unconventional side, rather than follow another’s footsteps. To keep the other fellow guessing as to what you will do next, you enjoy. Having to take orders from someone else is something you wish to avoid. You prefer to think as an individual, to work and express your opinions independently.”

Capt. Emil Praeger of the engineer/architecture firm of Praeger-Kavanagh-Waterbury in New York sends a letter to Walter O’Malley regarding seating and aisle width research for Dodger Stadium. “The width of seats is generally 20” as this is a comfortable space to provide for each person,” writes Praeger. “Conventional stairs in buildings, for instance, are 44” wide providing 20” for each of two people walking up or down stairs (4” for the thickness of two handrails). Aisles of 3’6” width were provided because this allows 21” for each of two people. People will not walk more than two abreast in going up or down an aisle and any surplus over 3’6” is wasteful.” Designer and engineer Praeger and O’Malley eventually selected theatre-style seats for Dodger Stadium that were up to 22” wide with arm rests between each seat. Praeger was a former Navy captain who had an impeccable record as an authority on bridges, foundations and parkways. He was the consulting engineer for the structural and foundation design for the White House renovation in 1949.

According to sportswriter Bud Furillo in the Los Angeles Herald-Examiner, “Faced with a bigger tax bill than were the tea-drinking colonists of Boston, Walter F. O’Malley readied new ammunition today in his revolt against County Assessor Philip E. Watson...The Dodger president contends Watson’s assessment would double the taxes originally pledged by civic officials before the construction of the stadium. O’Malley declined comment after the filing of a 24-page petition with the (Los Angeles) County Board of Supervisors in his behalf by attorney James J. Arditto yesterday. The case will be heard July 24. Under Watson’s figures, O’Malley faces a tax bill of $700,000 for 1963...Zoning restrictions prohibit O’Malley from a steady diet of other events. The assessor’s figure is 25 per cent of what he believes to be market value of the property. Watson’s full market value is $32,350,644. The Dodger petition evaluates the property at $18,332,244. In 1962, County Assessor John R. Quinn placed the full market value at $14,787,500, when the stadium was 95 per cent completed. The petition before the Board of Supervisors reminded the county body of the tax figures used in arguments prior to the referendum, to wit: ‘The Dodgers moved their baseball franchise and team from Brooklyn to Los Angeles in response to an ordinance contract passed by the city council Oct. 7, 1957, and resolution of the Board of Supervisors adopted Sept. 17, 1957. The contract ordinance was subject to a city-wide referendum and was approved by the voters on June 3, 1958. The official mailing piece to the voters consisted of ballot, copy of contract ordinance, copy of Board of Supervisors resolution, arguments pro and con. The pro and con arguments both used a tax figure of $345,000.”Bud Furillo, Los Angeles Herald-Examiner, July 16, 1963

Ray Bolger and his wife Gwen are guests in Chairman of the Board Walter O’Malley’s box at Dodger Stadium. Gwen Bolger signs the guest book, “A Perfect Evening.”