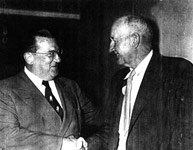 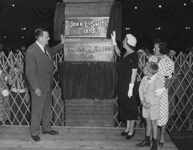 Walter O’Malley dedicates plaques commemorating Wilbert Robinson, former Dodger manager, and John L. Smith, former part-owner of the Dodgers, at Ebbets Field in Brooklyn. Participating in ceremonies were Mrs. Frank Campbell, daughter of Mrs. John L. Smith, Dazzy Vance, former Dodger star pitcher, Mrs. Mary Guntzer and Harry L. Robinson, daughter and son of “Uncle” Wilbert Robinson, who was also Dodger President from 1925-29. Vance was subsequently inducted into the National Baseball Hall of Fame in 1955. The plaques joined one previously dedicated to Charles H. Ebbets, the former Dodger owner for whom Ebbets Field was named.The Sporting News, August 1, 1951 Bill Corum, New York Journal-American columnist made the suggestion of adding a plaque for Robinson at Ebbets Field and O’Malley agreed and obliged. O’Malley asked Corum to unveil Robinson’s plaque. In conjunction with the 75th Anniversary of the National League, 60-year-old Vance once again took the mound and pitched to Gil Hodges, Jackie Robinson, Rube Walker, Duke Snider and Carl Furillo. “The ol’ Dazzler” made five pitches to each and still showed great control. “They’ll have to furnish all the power themselves if they want to hit the ball out of the park,” said Vance.Michael Gaven, New York Journal-American, July 22, 1951

Walter O’Malley provides 3,500 complimentary tickets to a Dodger game at Ebbets Field to the Hospitalized Servicemen’s Committee for distribution to servicemen and disabled veterans. 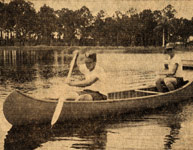 In town for the Dodgertown Summer Camp for Boys, Walter O’Malley says of Vero Beach, Florida and its future that the Dodgers, “have never once thought of giving up their spring training facilities at Dodgertown. We’ve got the finest spring training facilities in the country right here at Dodgertown. Not only that, with the using of these facilities for a summer boys’ camp, it now serves a twofold purpose. Vero Beach is the only city in the country that doesn’t have to worry about where the Dodgers are or aren’t going.”Bob Curzon, Vero Beach Press-Journal, July 25, 1957

The day after Bill Singer’s late afternoon 5-0 no-hitter over Philadelphia at Dodger Stadium, Walter O’Malley writes the following note to the 6-foot-4 right-hander: “Dear Bill: Congratulations on your no-hitter, it is a great personal comeback triumph for you and it came at a time when our Dodgers did need a lift and you gave it to them. All the best.” Singer had bounced back from a 53-day bout with hepatitis earlier in the season from April 22 to June 14 to win his fourth straight game. He struck out 10 and didn’t walk any Phillies. Singer hit Oscar Gamble in the first inning and made an errant throw allowing Don Money to reach first base on an error. Singer, nicknamed “Billy No-No” because his head bobbed from side to side when he ran, became the first Dodger right-hander to record a no-hitter since Sal Maglie in 1956. Because of the unusual 4 p.m. starting time on a smoggy Monday in Los Angeles, only 12,454 witnessed the game. The game time was to accommodate NBC, which originally planned to nationally televise the game, but later canceled. Dodger catcher Jeff Torborg was behind the plate for Singer’s no-hitter, as he had been for Sandy Koufax’s perfect game at Dodger Stadium on September 9, 1965.

While the Dodgers play the St. Louis Cardinals on the field at Dodger Stadium, Walter O’Malley entertains Dodger Hall of Fame catcher Roy Campanella, former Dodger Manager Walter Alston and Dodger pitching great Johnny Podres in the Chairman’s Box. In 1983, Alston was inducted into the National Baseball Hall of Fame.