Three days after having lunch with inventor and designer R. Buckminster Fuller, Walter O’Malley meets again with Fuller, this time with engineer and designer Capt. Emil Praeger present. O’Malley was focused on building a translucent dome stadium in Brooklyn at the intersection of Atlantic and Flatbush Avenues and reached out to Fuller for his expertise as the inventor of the geodesic dome.

Dodger broadcaster Vin Scully writes a column for The Tidings in Los Angeles, pinch-hitting for Charles G. Johnson, sports editor who is on vacation. In Scully’s column he reminisces about the Dodgers of 1950-55 stating, “The personnel of any major league ball club changes rapidly over the years, but the Dodgers of an era from 1950 to 1955 will be the team I will always remember. The infield had Gil Hodges on first, Jackie Robinson on second, Pee Wee Reese on short and Billy Cox on third. Left field was never occupied too long by any one man. But in center there was Duke Snider and in right field Carl Furillo. Behind the plate was Roy Campanella. The pitchers I will remember always were Preacher Roe, Carl Erskine, Ralph Branca, Don Newcombe and Clem Labine. There were others who came and played with that team, but they stayed awhile and then left. The men I mentioned dominated the National League as no other team will do for quite some time to come. If I live to be a hundred, and see the Dodgers 70 years, they are the men I will best remember.”Vin Scully, The Tidings, July 22, 1960 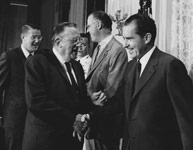 Walter O’Malley and his son Peter attend a 5 p.m. reception for Major League Baseball officials hosted by President Richard M. Nixon at the White House. The All-Star Game, which was scheduled for that night in Washington, D.C., was postponed due to rain for the first time in its history. The game was played at RFK Stadium on July 23, with the National League winning 9-3.