Local 802, American Federation of Musicians, takes action against the Dodgers, since non-union “musicians” are performing at Ebbets Field as part of the Dodger Sym-Phony band. The Dodger Sym-Phony, a rag-tag group of seven, also has two Local 802 members who have been playing for free at Ebbets Field. Walter O’Malley said, “We regard the Dodger Sym-Phony as a group of fans merely expressing their joy at being alive and being Dodger rooters. True, we let them in free, but we don’t pay them. Their form of expression is music — well, anyway, noise from musical instruments. We can’t see our way clear to paying them, any more than you would think of paying a lark for singing. If we started paying the Sym-Phony the next thing you know, we would have to pay fans in, say, Sec. 18, for cheering when a Dodger hits a home run, or the fans in Sec. 19 for booing the umpire.” O’Malley brokered a friendly plan with Local 802 and introduces “Music Appreciation Night” (or “Music Depreciation Night” as some jokingly described it) at Ebbets Field on August 13, 1951.Murray Robinson, New York World-Telegram, July 24, 1951

Lester B. Pearson, United Nations President of the General Assembly, thanks Walter O’Malley for providing tickets to two games between the Dodgers and the Milwaukee Braves. “As you may know, I have been an eager baseball fan for years and I have watched the achievements of your team and of its individual players with great enthusiasm.” Pearson served as Prime Minister of Canada from 1963-68 and was awarded the Nobel Prize for Peace in 1957. 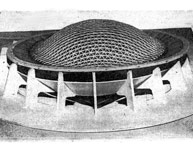 Three members of the new Brooklyn Sports Center Authority are sworn in by New York Mayor Robert A. Wagner — Charles J. Mylod, Robert E. Blum and Chester Allen — giving life to the possibility of the redevelopment of a 110-city-block area in downtown Brooklyn. A 50,000-seat, all-weather dome stadium, proposed by Walter O’Malley, for baseball and other sports and events, is a major part of the rehabilitation of the area, which will include ample parking facilities for businesses and stadium events. The stadium would be located at the intersection of Atlantic and Flatbush Avenues. “If built along the lines advanced by (designer) Capt. (Emil) Praeger, the Brooklyn Stadium would cater to all sports and would be in use all the year round instead of being just a 77-game luxury arena, merely for the baseball season,” O’Malley explained. “Horse racing is planning a new Aqueduct track and a rebuilt Belmont Park at a cost of some $30 million. Trotting is planning a new plant at Westbury with every modern facility. Baseball cannot lag behind.”Dan Daniel, New York World-Telegram and Sun, July 25, 1956

The Los Angeles Dodgers defeat the Baltimore Orioles, 6-2, in the annual Hall of Fame exhibition game in Cooperstown, New York.

George Parnassus, known as one of the top promoters in boxing history, meets with Walter O’Malley at Dodger Stadium. Many of the matches Parnassus promoted were in the smaller weight classes. He found success in his quality shows with boxers like bantamweight champion Raton Macias, bantamweight Jose Beccera, and lightweight champion Juan Zurita. As a non-participant, Parnassus was posthumously inducted into the International Boxing Hall of Fame in 1991.

Walter O’Malley thanks columnist Bob Schelb for his article regarding the increased annual tax for Dodger Stadium. “It is good to know we have thinking people on our side in this matter of tax harassment. Putting your opinion in writing, as you did, shows on what side of the fence you stand.” Schelb wrote in The Sunday Ledger, “It is a constant source of amazement to us why the continuing harassment of Walter O’Malley and the L.A. Dodgers the latest being the tax assessment being levied on Dodger Stadium...Aside from sports it appears that there is a situation involved which embraces commitments and inducements made in good faith by one party to another, for as we recall L.A. was most anxious to lure the Dodgers to Los Angeles — in retrospect, one of the wisest moves the Council had made in years. It is the breaking of these overtures which disturbs us — we don’t believe success should be stifled or ridiculed — if the property in question is really worth the tremendous increase in taxation we’d be the first to agree that payment should be made without question but serious doubts have been raised by many quarters that leave us just a bit mystified as to motivation for this new harassment of a fine organization that has certainly brought much credit to Southern California.”Bob Schelb, The Sunday Ledger, July 21, 1963 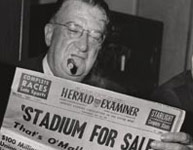 Walter O’Malley made headlines — “Stadium For Sale” in the Los Angeles Herald-Examiner — when he states that he would be happy to sell Dodger Stadium for the nearly $33 million the Los Angeles County Tax Assessor Philip Watson thinks it is worth. Dodger Stadium was only in its second year of existence at the time. O’Malley makes his statement during a hearing before the County Board of Supervisors in which he was attempting to substantially reduce the proposed property taxes based on two independent appraisals of the land at $19.3 and $19.5 million, respectively.UPI, July 24, 1963