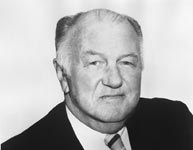 Arthur “Red” Patterson is hired by the Dodgers and the Dodgers win the game in 13 innings. Well known in baseball for his red hair, Patterson would direct the Dodgers’ promotion and public relations departments through the 1974 season and would finish his baseball career as president of the California Angels. Patterson covered the Dodgers, Giants and Yankees as a writer for the New York Herald Tribune before moving into the front office. He had been working for the Yankees as their promotion director until his resignation. O’Malley said after the 13 inning win “I knew that all we needed in the organization was a redhead. I have longer considered Patterson a valuable man and when I learned that he had terminated his relationship with the Yankees, I discussed him with Buzzie Bavasi who was eager to get so able an aide.”The Sporting News, August 2, 1954

Walter O’Malley discusses the difficulties of the relocation of a major league baseball team and the construction of a new stadium in the Joint Meeting of the Expansion Committees of the National and American League held at the Conrad Hilton Hotel in Chicago. Speaking to the hopeful investors of the New York franchise, O’Malley stated, “You have run into a situation that is quite similar to the one I ran into myself, when we were going to move out to the West Coast, and a settlement was finally reached there, but it was a hard chore...And I wasn’t able to get any help, nor did I seek any, as a matter of fact at the time we went out to the West Coast and had to satisfy the Pacific Coast League...You want to buy a house that somebody doesn’t want to sell you and that’s the position (they) take.”Joint Meeting of the Expansion Committees of the National League and the American League. The Dodgers and Giants paid $900,000 indemnification to the teams in the Pacific Coast League to acquire territory upon the move of the two major league clubs to California in 1958.

William Lear, Chairman of the Board for Lear Jet Company, receives a letter from Walter O’Malley as O’Malley relates the background of the pilot of the jet for part of the trip. “Let me tell you,” wrote O’Malley, “that we had a delightful and extremely short flight from Santa Rose (sic) to Burbank with a young man who is taking his second or third lesson in flying. I believe his name is Danny Kaye. I understand he is trying to become qualified to be an airline pilot because of the shortage...They tell me he has some talents as a cook...I thought you would want to know that we were not more than average nervous when the young redhead got into the wrong seat and handled the controls.” Kaye, in addition to being a tremendous entertainer of the stage, movies and television, was a licensed pilot and was cleared to fly many types of aircraft, including jumbo jets.

Jackie Robinson becomes the first baseball player to have his image on a United States postal stamp. The announcement was made at the National Baseball Hall of Fame in Cooperstown, New York.