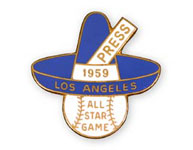 The Dodgers and the city of Los Angeles host their first Major League All-Star Game as the American League defeats the National League, 5-3, at the Los Angeles Memorial Coliseum. The All-Star Game is the first on the West Coast and is the second All-Star Game of the 1959 season. The purpose of the second game was to help bolster the players’ pension fund, as well as to support minor league baseball and juvenile baseball programs. The Dodgers’ Don Drysdale is the starting pitcher and left fielder Wally Moon is in the starting lineup for the National League. Dodger infielders Jim Gilliam and Charlie Neal are also named to the National League team by Milwaukee Brave Manager Fred Haney. Los Angeles Mayor Norris Poulson throws out the first pitch and singer Dennis Morgan performed the national anthem. Catcher Yogi Berra of the New York Yankees is named the Most Valuable Player of the game for his two-run home run in the third inning off Drysdale. When Berra was presented with the award, he asked, “What do I get this for, striking out twice?Los Angeles Herald-Express, August 4, 1959 Casey Stengel remarked to Berra upon the presentation of the MVP award for the game, “That thing’s (sic) so big, you’ll have to build a new room in your house for it.”Los Angeles Herald-Express, August 4, 1959 Frank Malzone and Rocky Colavito homered for the American League while Gilliam and the Reds’ Frank Robinson hit home runs for the National League. Walter O’Malley, along with the Commissioner’s Office, announced there would be no local television blackout of the game, as was the common practice. Yankee announcer Mel Allen and Dodger broadcaster Vin Scully provided the play-by-play on KRCA, now KNBC, Channel 4 in Los Angeles. The crowd at the Los Angeles Coliseum was the second largest in All-Star Game history at 55,105. The price for a box seat ticket was $8. Several players participating in the second All-Star Game who would later be elected to the Hall of Fame after their careers were over included Luis Aparicio, Yogi Berra, Nellie Fox, Al Kaline, Mickey Mantle, Hoyt Wilhelm, Ted Williams and Early Wynn in the American League. National League players who would be elected to the Hall of Fame were: Henry Aaron, Ernie Banks, Don Drysdale, Eddie Mathews, Willie Mays, Stan Musial (his 17th appearance, All-Star Game record) and Frank Robinson.

Don Drysdale wins his 20th game of the season when the Dodgers defeat the Cubs, 8-3. The date is the earliest for a National League pitcher to win 20 games since 1918.

The Dodgers give approval to Twentieth Century-Fox Film for the use of Dodger Stadium in production of an episode of the television show “The Felony Squad.”