The first annual Brotherhood Award of the William M. Moss Brotherhood of Concord Baptist Church was voted to Walter O’Malley. The plaque was awarded to O’Malley on “Brotherhood Day at Ebbets Field” on August 24, when the Brotherhood, their relatives and friends attended the Dodgers vs. Chicago Cubs game for a fellowship outing. Dewey Chester, president of the brotherhood, said that O’Malley was chosen for his outstanding contributions toward brotherhood between all men. The pastor of Brooklyn’s largest church, Dr. Gardner C. Taylor, agreed. A spokesman for the Brotherhood stated that “O’Malley was selected on the basis of his overall and persistent work in helping better human relations. Among his outstanding efforts have been the liberal support to projects of all faiths; racial policy. He was one of the ‘Angels’ to Piney Woods (Country Life School) of Mississippi, the (African American boarding) school once featured on Ralph Edwards’ “This is Your Life” TV program.”Memphis World, “O’Malley to Receive Brotherhood Award”, August 9, 1955

Davey Lopes sets a new Major League Baseball record when he steals his 32nd consecutive base. 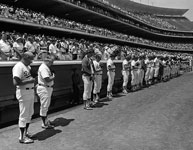 Walter O’Malley, Chairman of the Board of the Los Angeles Dodgers, passes away at the age of 75. He is buried at the family grave site next to his wife of 47 years, Kay, at Holy Cross Cemetery in Culver City. A moment of silence for O’Malley is held before the Dodgers’ day game with the Astros at Dodger Stadium.