Walter O’Malley, Branch Rickey and John L. Smith are the new tri-owners of the Brooklyn Dodgers. Rickey was president of the Dodgers and Smith was President of Pfizer Chemical. The three tri-owners purchased the remaining 50% of the stock of the family of Charles Ebbets, giving them 75% ownership of the franchise. The remaining 25% is held by Mrs. Dearie McKeever Mulvey, daughter of late Dodger President Steve McKeever. As one of the new owners of the Brooklyn Dodgers, Walter O’Malley reviews a wild game where the St. Louis Cardinals defeat the Dodgers, 7-6, in 15 innings. The game featured 36 players from both teams who played in the game. In addition, nine errors were made in the game, six by the Cardinals and three by the Dodgers.Brooklyn Eagle, August 13, 1945 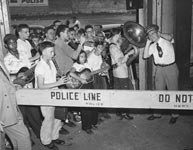 In his response to the Musician’s Union edict that the Dodger Sym-Phony could not play at Ebbets Field, Walter O’Malley opens the gates to anyone who brings a musical instrument to the game. The Union was trying to obtain fees from the Sym-Phony for playing at Dodger games, and O’Malley felt the good natured humor and the music by the Sym-Phony added to the charm of Dodger game. The fans with musical instruments were placed in left field. Aisle seats were reserved for tuba players. Reporter John O’Reilly of the New York Herald Tribune wrote, “One of the ghastliest events in the history of either baseball or music took place last night in Ebbets Field when more than 2,426 persons armed with musical instruments ranging from zithers to tubas, took over the upper leftfield stands and played their hearts out in honor of the return of the Brooklyn Sym-Phony to active status. Four stalwart Dodger fans were seen to be wheeling a piano along Brooklyn streets. The four fans were allowed in, but the piano had to stay outside the ballpark. A few sharp persons sold kazoos for fifty cents that allowed them for the free admission. One Dodger official said ‘Kazoos and harmonicas were not supposed to be allowed, but we let them in anyway. There were a lot of father and son combinations. The father would be carrying the instrument and the son would be carrying the case, but we let them in also’. Dodger President Walter O’Malley wore a miniature harmonica on his lapel and when asked to comment on the evening said, ‘That’s really something in there.’”New York Herald Tribune, August 14, 1951 New York City Mayor Vincent Impellitteri was also present at the game. With the help of the musicians, the Dodgers defeated the Braves, 7-6.

The Sporting News carries a story that Walter O’Malley issued a statement to the written media before going on a television program between games of a doubleheader in order to inform television viewers of what he intended to say. “I will not give anyone a check if asked about the attendance. I’ll admit it’s off but hope it gets better. If asked about Charlie Dressen (Dodger Manager) I will, of course, give him a vote of confidence. If asked about umpires, I will NOT run them down. If asked about the world tour (the Dodgers had been planning a potential world tour with the Cleveland Indians) “I will de-emphasize (I want to win the pennant first), but we plan to make the trip. What else can they ask me except about my ulcers?” On the same date, The Sporting News writes in an editorial that Walter O’Malley wants to energize the Dodger fan and the only way to do that says O’Malley is, “We have got to win a world’s championship for the first time in Dodger history. To win the world’s championship—well, that’s the thing we have to do give our fan his old snap and his old enthusiasm. Our faith in his loyalty has never been shaken.” O’Malley asked by The Sporting News if he would sell prominent Dodger players for a better return for the shareholders. “Not a chance,” said O’Malley, “I turned down $600,000 and two players for five of our players last winter.”The Sporting News, August 13, 1952 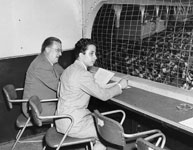 King Faisal of Iraq is a guest of Walter O’Malley for a game between the Dodgers and the Giants. The 17-year old king was presented a Dodger cap by Manager Charlie Dressen and received team autographed baseballs. It was the first major league game the King had witnessed. 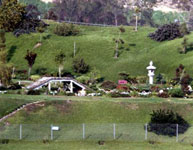 Japanese sportswriter and future member of the Japanese Baseball Hall of Fame Sotaro Suzuki writes Walter O’Malley to tell him that a “Kasuga” stone lantern is nearly complete and will be shipped to O’Malley in the near future. The lantern was sculpted in Okazaki City, near to Nagoya, Japan. The stone lantern was a prominent feature of a Japanese garden that existed beyond the Union 76 station in center field at Dodger Stadium. The seven-foot lantern remains there today.

Walter O’Malley attends a memorial service for former Dodger Manager Charlie Dressen at St. Paul the Apostle’s Church in Los Angeles. Dressen managed the Dodgers to World Series in 1952 and 1953 and was a coach for the 1959 World Champions. Dressen also managed the Washington Senators, Milwaukee Braves and the Detroit Tigers in a career in baseball that spanned more than 40 years.

Walter O’Malley attends a dinner for that year’s White House Fellows at the Biltmore Hotel in Los Angeles. The White House Fellow program was established by President Lyndon Johnson in 1964 to provide an opportunity for qualified persons to be involved in the highest levels of the United States Government. White House Fellow alumni include U.S. Army Generals Colin Powell, Wesley Clark and Pete Hawkins, a former Heisman Trophy winner, and a number of elected officials and business leaders. Personalities who were White House Fellows at this dinner include Charles Ansbacher, future conductor for the Boston Landmarks Orchestra, and a former California Congresswoman Lynn Schenk.