Walter O’Malley is the guest speaker for the Rotary Club of Pasadena. The Rotary Club featured “Batter Up! It’s Baseball’s Day!” as O’Malley spoke of the first season of the Dodgers in Los Angeles. O’Malley had initially reviewed Pasadena’s Rose Bowl as a potential temporary home for the Dodgers. 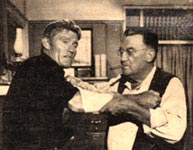 Hedda Hopper writes in her column how Walter O’Malley came to appear on the television show “Branded” with Chuck Connors. “He (Connors) asked me to appear on the show. I said, ‘Sure, sounds like fun’. Then I get back from Florida, where I’m building my players a little golf course, and this yarn about my turning actor is in all the papers. When I get through with the part, all actors may be out of work.”New York Daily News, August 20, 1965 Los Angeles Times columnist Sid Ziff was present on the set with O’Malley on the day of filming and writes a full column of O’Malley’s day. Ziff writes that O’Malley spoke the following lines, “That’s a bad wound. Almost a severed tendon. Don’t figure to use that arm for at least two weeks.” Ziff relates a story from O’Malley on the first time he (O’Malley) saw Connors and the young rookie had 13 pieces of luggage on reporting to Spring Training. Ziff writes that O’Malley said “I knew then he was going places.” O’Malley told the story of Connors’ only major league at bat with the Dodgers. “The only time he (Connors) came to bat as a Dodger he hit into a double play and kept right on going to the clubhouse. Jake Pitler was coaching. Hey, where do you think you’re going, Connors?’ shouted Pitler. ‘To Montreal (Dodgers’AAA club)’ he said. You know, that’s a true story. Chuck figured he didn’t have a chance.” Ziff finished his column by writing, “It was easy to fit O’Malley into the picture. He was the one who looked liked Sydney Greenstreet and had just enough ham to sail into the part with flying colors.”Los Angeles Times, August 20, 1965

Kay and Walter O’Malley go to a concert performance by French actor and singer Maurice Chevalier in Covina, California.