Walter Peterson, City Clerk of Los Angeles, notifies Walter O’Malley that Los Angeles City Councilwoman Rosalind Wyman has made a motion that was adopted by the City Council. The motion reads “Reports in the sports sections of our local newspapers have stated that the president of the New York Giants, Horace Stoneham, and president of the Brooklyn Dodgers, Walter O’Malley, have recently conferred with Mayor Wagner of New York concerning a crisis facing these two ball clubs—‘they need a ballpark.’ One of the local papers on Saturday, August 20, quoted Mr. Bob Cobb, President of the Hollywood Stars to the effect that the New York Giants and the Brooklyn Dodgers should be encouraged to move to Los Angeles and San Francisco. The time appears to be ripe. Certainly if the people of New York must act to keep the clubs there, we can act to bring them here. I THEREFORE MOVE THAT the Presidents of the Giants and Dodgers be wired that the City of Los Angeles is seriously interested in making a home for a major league club and it would be appreciated if the gentlemen could come here for a serious conference and ‘look-see’ at our facilities. I FURTHER MOVE that in the event these gentlemen cannot come pursuant to our request, that Council Roybal and myself (Mrs. Wyman) be authorized as official representatives of the City to call upon the Dodgers’ and Giants’ presidents when we are in New York on September 22. This would be at no additional expense to the taxpayers as we will be in New York on city business on that date anyway.” 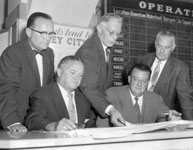 Walter O’Malley goes to New Jersey to meet with city officials on a proposal for the Dodgers to play seven National League games at Roosevelt Stadium in Jersey City, New Jersey. Roosevelt Stadium had been used for auto racing and a skating rink and city officials were making plans to convert the use for baseball. The Brooklyn Dodgers would play seven games in Jersey City during the 1956 and 1957 seasons. Also, on this date, Walter O’Malley extends an invitation to New York City Parks Commissioner Robert Moses to enjoy a Dodger game with O’Malley at Ebbets Field.

Walter O’Malley reaffirms his dedication to build a new stadium in Brooklyn with private money as he states, “In the last fifteen years there hasn’t been a new stadium built with baseball money anywhere in the United States. We are willing to invest Dodger capital in a new stadium, provided we can get the only practical site in Brooklyn.”New York Times, August 23, 1955

Craig F. Cullinan, chairman of the Houston Sports Association executive committee and George Kirksey, executive secretary of the Association arrive in Los Angeles to meet with Walter O’Malley on their hopes of obtaining a National League franchise for the city of Houston. Kirksey said, “We also had a very informative meeting with Mr. O’Malley. We discussed expansion problems and he was kind enough to show us the plans for his Chavez Ravine ballpark. O’Malley replied, “Our Houston friends are anxious to know the final solution of baseball expansion and so are we. Our committee is now working on its report which will be presented to the league meeting sometime after the season ends.” The Houston group received a National League team starting with the 1962 season and were named the Houston Colt 45’s. The team then changed their name in 1965 to the Astros to honor the space program which had opened the Kennedy Space Center in Houston.

Jim Bligh of Sayville, Long Island, writes Walter O’Malley to inquire why the Dodgers left Brooklyn. O’Malley writes a one paragraph summation. “You are curious as to why the Dodgers left Brooklyn. I can understand this Jim, and I must say that if you were to form an opinion as to what you read in the paper you would be grossly misinformed. Actually, we spent 10 years trying to secure approval to build our own ball park in Brooklyn. As you know, Brooklyn is a very crowded community and there was little land big enough for a ball park and parking. We introduced legislation in Albany (capital of New York state) to make it possible for us to have condemned the produce market at the LIRR depot for a new ball park. We hired engineers and had plans drawn to do this which, of course, would have that the team would stay in Brooklyn. With the cooperation of Gov. Dewey and later Gov. Harriman we did get the necessary legislation passed but when it came to implementing this legislation the City of New York sabotaged the plan. Commissioner Robert Moses was not in favor of it and Mayor Wagner could not get the necessary votes to accomplish the purpose of the legislation...Parking is very important these days and at Ebbets Field we could only park 700 cars in odd lots near the ballpark. Here in Los Angeles we park 16,000 cars in individual slots and we have set the pattern for all new stadia built since this one to add to the convenience and safety of the fans.”