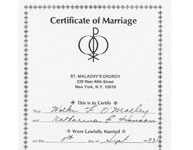 Don Newcombe wins his 20th game of the year when he defeats the Philadelphia Phillies, 11-4. In the game, Newcombe ties a National League record for a pitcher when he hits his seventh home run for the season.

Walter and Kay O’Malley celebrate their 24th wedding anniversary in style, watching not one but two victories over Philadelphia at Ebbets Field to eliminate both the Phillies and the defending World Champion New York Giants from pennant contention. Nearly 50,000 fans tried to get into Ebbets Field which somehow accommodated 33,451 for the doubleheader. Only the Milwaukee Braves remained in the hunt, but they too would fall three days later as the Dodgers wrapped up the National League crown. 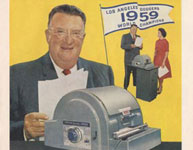 In the current issue of Newsweek, Walter O’Malley appears in an advertisement for the Kodak Verifax Bantam Copier. The Dodgers won the 1959 World Championship and O’Malley states about the $99.50 copier, “It’s got that ‘something extra’ that makes a champion!” A World Championship banner from 1959 is shown in the ad. Also appearing in the ad is Jeanne Grammatico, an administrative assistant in the Dodger Front Office.

Renowned columnist Walter Winchell writes in his column, “Dodgers’ boss Walter O’Malley rates a back-pat for reminding fans how the lyrics go to the Anthem. Via a giant-sized electric-sign in the bleachers...Any other ballpark do that?” The next day, Rudy Rufer, the Chief Scout for the Eastern Area for the Dodgers, sent O’Malley the column with a note, “It is something like this, that makes us ‘extra’ proud to be part of the Dodger ‘Family.’”Walter Winchell, "Walter Winchell of New York," New York Daily Mirror, September 5, 1962

Kay and Walter O’Malley, celebrating their 38th wedding anniversary, attend the Bicentennial Governor’s Ball at the Century Plaza Hotel. A television was set up at O’Malley’s table by Chairman John Bowles so that the Dodger owner could watch the team play in San Diego. The “Governor” of the Ball was not Ronald Reagan, but Gov. Pio Pico, California’s last Mexican Governor. According to the Los Angeles Times, “In addition to marking the State of California’s bicentennial, the ball also celebrated Los Angeles’ Name Day (Sept. 4) and the city’s 188th birthday.”Los Angeles Times, September 8, 1969

On the occasion of their 40th wedding anniversary, Kay and Walter O’Malley were special guests at a party hosted by son Peter and his new bride Annette in their Hancock Park home. More than 150 family members and guests celebrated Walter and Kay’s anniversary. Monsgr. Patrick Gallagher, the priest who performed his first wedding at their marriage, was in attendance.

Kay and Walter O’Malley have been married for 45 years on this date and attend an anniversary dinner at Scandia in Los Angeles.