Raymond R. Camp in his special to The New York Times writes about the United States Atlantic Tuna Tournament in Montauk, Long Island, New York stating, “Walter F. O’Malley, who served as chairman of the tournament committee, did an outstanding job in insuring the smooth operation of the fishing.”Raymond R. Camp, "Wood, Field and Stream," The New York Times, September 9, 1950

California Governor Earl Warren attends a Dodger-Reds game at Ebbets Field. Governor Warren was introduced from Walter O’Malley’s private box. After the game, O’Malley escorted Gov. Warren to the Dodger clubhouse where he met Dodger players from California, Duke Snider and Wayne Belardi. Warren would be nominated as Chief Justice of the Supreme Court by President Dwight D. Eisenhower and would take the oath of office on October 5 of the same year.Roscoe McGowen, The Sporting News, September 9, 1953

Sandy Koufax, the greatest left hand pitcher in baseball history, throws a perfect game, retiring all 27 Chicago Cubs in a 1-0 win at Dodger Stadium. The Dodgers have only one hit in the game, a pop fly double by Lou Johnson in the seventh inning that does not figure in the scoring. The Dodger run occurs in the fifth inning when Johnson walked, was sacrificed to second, then stole third and scored on a throwing error by the catcher. The ninth inning broadcast of the perfect game is by the greatest sportscaster in history, Vin Scully.

Charles S. Casassa, S.J., President of Loyola University of Los Angeles, sends a thank you letter to Walter O’Malley, who agreed to serve on the President’s Council at Loyola. “I was delighted to learn that you would be willing to serve,” said Casassa. “I certainly appreciate this action on your part. We shall look forward to seeing you at future meetings, and I hope you won’t be too worn out by all the problems attendant upon constructing a new stadium.”

Jack Brickhouse, the Baseball Hall of Fame sportscaster with WGN and for many years the voice of the Chicago Cubs and White Sox, sends a letter to thank Walter O’Malley for appearing as his guest on television. “I have received many fine comments along the lines that this was one of the best interviews we have had all season. It was a privilege to have you as my guest.” 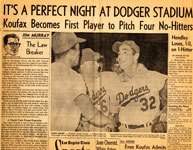 Perhaps, the most memorable Dodger game in Dodger Stadium history is played, as Sandy Koufax fires a 1-0 perfect game to defeat the Chicago Cubs before a crowd of 29,139 in one hour and 43 minutes. The Cubs’ Bob Hendley only surrendered one hit, a bloop double by “Sweet” Lou Johnson, which broke up a double no-hitter in the seventh inning. The Dodgers scored the game’s only run without a base hit in the fifth inning on a walk, a sacrifice, a stolen base by Johnson and a throwing error by Chicago catcher Chris Krug on Johnson’s steal. After the game, Walter O’Malley announced that Koufax would receive a $500 bonus, customary practice by the Dodger President after a club no-hitter. “We were rooting for Hendley to pitch a no-hitter, too, after our side got a run,” O’Malley said. “I was hoping Lou Johnson’s ball would be caught instead of falling in for a hit. What could be better than seeing a double no-hitter? Hendley was almost as good as Koufax. It was a great performance. He’s the best pitcher the Dodgers have ever had by far.”Bud Furillo, Los Angeles Herald-Examiner, September 10, 1965

The Sporting News reports that Walter O’Malley picked a winning horse at Del Mar (CA.) race track. O’Malley bet two dollars on “Don S.,” a horse owned by Dodger pitcher Don Drysdale and the horse won the race, paying $35.80 on the two dollar bet. O’Malley quipped, “It was about time I got something back on Drysdale.”The Sporting News, September 9, 1967